Malakii Pinkelton is an exceptionally athletic fifth grader at Bataan Intermediate School in Port Clinton. In March, the 11-year-old won a pair of state wrestling titles in his 85-pound class, even though wrestling is a relatively new sport for the flag football star.

“Malakii loves football, and it is his first passion,” said his mother, Tarah Haynes. “We encourage him to do well in sports, as long as he continues to get good grades. His teachers tell us he’s also a leader in his class.”

Pinkelton and his Port Clinton Flag Football All-Star Team was ranked No. 1 in the country. He’s been playing tackle football, as well, since he was in the third grade. As a running back and middle linebacker for the Port Clinton Braves, a Pinkelton touchdown run last fall was top-rated on ESPN Sports Center’s Top 10 plays of the day.

The youngster wrestles for Coach Chad Hetrick and the Headstrong Wrestling Club, competing in the Ohio Athletic Committee (OAC) championships on March 23-24 in Youngstown. He battled through a 32-man bracket to win the D3 title at 85 pounds. A week earlier, Pinkelton had won the OH-Way State Championships on March 16, and has earned All-Ohio and All-American status.

Pinkelton began wrestling, oddly enough, in order to get into boxing. His father, William Pinkelton, promised his son he’d be allowed to box if he started out as a wrestler.

“Malakaii is an average, happy kid who enjoys playing Fortnite with his friends,” said his mother. “His humility is just as admirable as his list of accomplishments.” 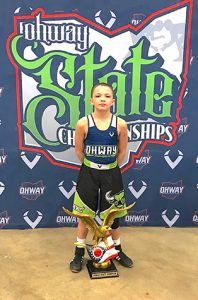 Malakaii Pinkelton poses with his championship trophy earned on March 16 in the OH-Way State Championships.