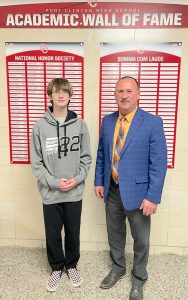 Fisher is the son of Dawn and Dean Fisher. Besides his academic achievements, Fisher is involved in numerous school activities, including the tennis team. He plays the violin in the Port Clinton Orchestra and alto saxophone in Band.

Other clubs and organizations include National Honor Society and Drama Club. Fisher is in Boy Scouts, and currently working on Eagle Scout status. He is the Senior Patrol Leader for Troop 360. Next year he plans to major in Architecture.