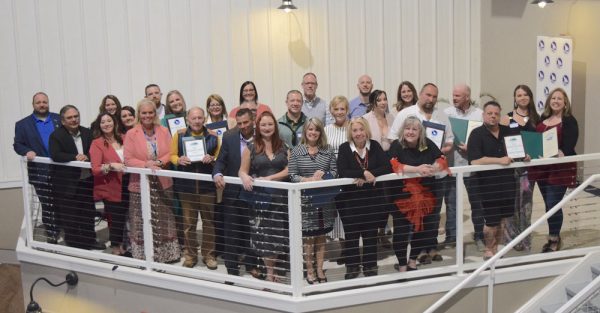 The crowd of winners at the annual Awards Dinner held by the Port Clinton Chamber of Commerce and Main Street Port Clinton gathered afterward on Thursday evening at The Jet Express’s new Island Port Bar and Grill.

The Port Clinton Chamber of Commerce and its companion, Main Street Port Clinton, handed out their annual awards on Thursday evening at The Jet Express’s new Island Port Bar and Grill. Leading the chamber’s list was The Art Garage, winning the Business Member of the Year Award, and Northern Exposure, taking the trophy for Main Street Business of the Year. 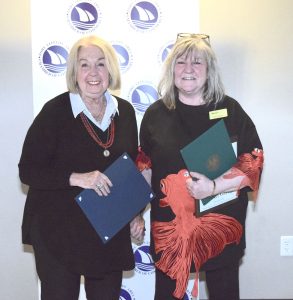 The Art Garage, which has become a cultural art center in Port Clinton in a very short time, is a partnership between the Greater Port Clinton Area Arts Council (GPCAAC) and the City of Port Clinton. The arts group converted a shabby city garage built in 1935 into an art showplace at 317 W. Perry St., with such stellar artists-in-residence as sculptor Andy Sacksteder and the oil paintings of Rick Dziak.

Also nominated for the Business Member of the Year were Spa Catawba and Polter Real Estate.

Founded in 2013 by local residents Kelly and Billy Ragoni, Northern Exposure at 136 Madison St. was the Main Street Business of the Year, honored for anchoring Port Clinton’s main retail area. The eclectic shop, which often tours with its RV-turned-pirate ship, has become a popular clothing, candle and nautical shop in Vacationland. Parlaying its popularity, the Ragonis will soon open Gully’s Lake Wear at 121 Madison St.

The Main Street Revitalization Award went to Rich Kokinda and five of his Port Clinton High School long-ago classmates for their partnership to purchase the former Hershberger Building on Madison Street, creating The Brick House restaurant and new homes for other businesses in the 110-year-old building.

Kokinda and his wife, Diane, partnered with classmates and their wives from near and far, including Joe and Chris Brenner; Rick and Stacy Milazzo, Brian and Martha Celek; Lori Kokinda and Todd and Margie Warnicke.

To make it a very sweet night for them all, The Brick House received the Outstanding New Business Award. The chamber gave the restaurant’s family recipes rave reviews, including its Stone Oven Pizza, Fajita Grinders and hand-crafted cocktails. 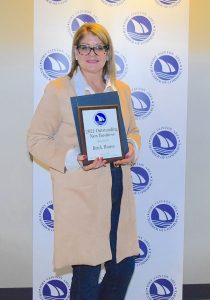 A team effort helped win the Chamber of Commerce’s Outstanding New Business Award for The Brick House on Madison Street. Lori Kokinda accepted the award for a group of Port Clinton High School graduates that also included Rich Kokinda and his wife, Diane, Joe and Chris Brenner; Rick and Stacy Milazzo, Brian and Martha Celek; and Todd and Margie Warnicke.

The Beautification Award went to Jolly Roger’s Seafood, a Port Clinton tradition that had moved a few dozen yards from its old location into a brand new, plush restaurant with a view of Lake Erie. Its flavorful yellow perch didn’t change a bit, and customers have complimented the larger seating area, more parking, better views of Lake Erie and additional outdoor patio seating.

A fixture for fishermen at the north end of Madison Street on the Portage River, Fisherman’s Wharf was presented the Lighthouse Award. A stone’s throw from the old and new businesses in the downtown area, and the MOM Stage, Fishermen’s Wharf has been known for supplying quality fishing tackle since 1960, and ferrying fishermen to Lake Erie on its party fishing boats.

Abbie Fox created the popular Lakelynn Design in downtown Port Clinton in 2017, and was given the Outstanding Citizen Award by the chamber for her tireless efforts to promote and market what the city has to offer. From Chamber Board Director to chairwoman of the Port Clinton Chamber Ambassadors Committee and Director of the Port Clinton Farmers Market on Sunday, Fox’s involvement has been instrumental in the recent growth around Port Clinton.

The Ambassador of the Year is Chrystal Petersen, a native of Port Clinton who has worked for Croghan Colonial Bank for 20 years, most recently as a Marine Finance Specialist. For the last six years Petersen has been a Port Clinton Chamber Ambassador, spending countless hours volunteering.

Main Street Volunteers of the Year were Jan Gluth and Frederick Agency Inc. for the individual and business awards. Gluth is the Director of Student, Staff and Community Development for the Port Clinton School District. She coordinates internal and external communications, along with digital and print publications, social media and event planning.

Frederick Agency Inc. has been fulfilling the insurance needs of Port Clinton, Catawba island, Marblehead, Put-in-Bay and the surrounding areas since 1944. It is known for its professional and friendly service.