When Bistro 163 made its debut in June 2016, lots of fingers were crossed, hoping the “pay-it-forward” concept could survive in Port Clinton. The small restaurant in Sutton Center on Buckeye Boulevard has not only flourished, but Chef Stacy Maple’s signature American fare was selected by Toledo Blade food critics to make Bistro 163 one of only two 5-Star eateries in northwest Ohio.

“I don’t even remember the reviewer visiting our restaurant,” said Maple, who was stunned by the review. “I was told they made two trips, one for breakfast and another for lunch, and that they had spoken with me to find out more about our mission.”

The reviewers didn’t beat around the bush.

“This nonprofit restaurant in Port Clinton with a pay-if-forward concept scores valuable points for not only serving delicious farm-to-table breakfasts and lunches, but also for its mission. Those who can afford it are encouraged to pay more than the suggested prices (average entree cost is $8) to help others enjoy a meal,” they reported.

When a group of Port Clinton area benefactors decided on opening a pay-if-forward restaurant, the chances for success of Bistro 163 were quite tenuous. No one on the board of directors had ever worked in a restaurant, said Maple, but they knew they wanted Bistro 163 to be staffed by volunteers and give away free meals.

“I had my own business, and was working as a restaurant consultant in the Cleveland area,” explained Maple, who has lived in the Marblehead area with her husband, Criss, for 15 years. A graduate of the Le Cordon Bleu Institute of Culinary Arts and the French Culinary Institute, Maple was attracted to the mission.

“Their business plan, though, sounded like a recipe for disaster,” said Maple, with a laugh. “But I joined the group, hoping to give them a fighting chance. I really didn’t plan on sticking around.”

The more involved Maple became, the stronger became her bond with the restaurant, its directors, volunteers and mission.

“I wasn’t aware of the hunger crisis in this area, perhaps because I didn’t want to see it,” she said. “I’d heard it was an issue. Now i see it every day. It is difficult to run any restaurant, much less one that depends on philanthropy. With great support from the community, and the investment of funds and time, we can tell  people to just come have something to eat, come have lunch with us.”

Maple is the only full-time employee of Bistro 163. There are 15 part-time workers, such as Sous Chef Ryan Ross of Oak Harbor, and more than 90 unpaid volunteers who serve as waiters, dishwashers, greeters, mop floors and take out the garbage.

Many of the volunteers are retired, including Ginny McCook of Catawba and Dick and Karen Dietz of Lakeside.

“Karen and I have been on board for the last year, and we love working at Bistro 163,” said Dietz, a retired insurance broker. “We’ve met so many wonderful people, and have encouraged friends at Firelands Presbyterian Church to join us.”

The farm-to-table concept that has made Bistro 163 a hit is familiar to Maple.

“I grew up on a farm in Fredericktown, Ohio,” she explained. “My mom was a baker and dad was a teacher. It was so cool to have a farmer and a chef in the same house.”

The farm-to-table lifeline in Ottawa County is Route 163, which runs through the entire county from east to west. Hence, the name Bistro 163.

Some simple concepts have help Bistro 163 to flourish, as well. Maple said the food has to be exquisite every day, and the price range very affordable.

“As a result, the people who can pay it forward, most often do,” said Maple. “And they give much more than expected. They know they’re going to get a great meal, with everything made in-house, and from scratch.

“One of my favorite times to volunteer is the second Monday of the month, when we encourage school students to come in from 3-5 p.m. to do homework, socialize or get advice,” said Ginny McCook. 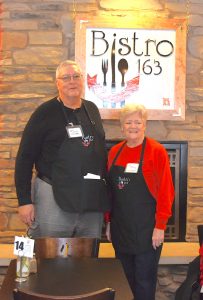 A major reason for the success of Bistro 163, a “pay-it-forward” gourmet restaurant in Port Clinton, is an army of almost 100 volunteers who make sure guests are welcome, meals are great, and the restaurant is warm and welcoming. Dick Dietz of Lakeside and Ginnny McCook of Catawba enjoy donating a few hours each week. 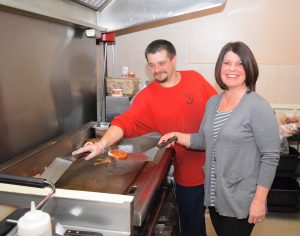