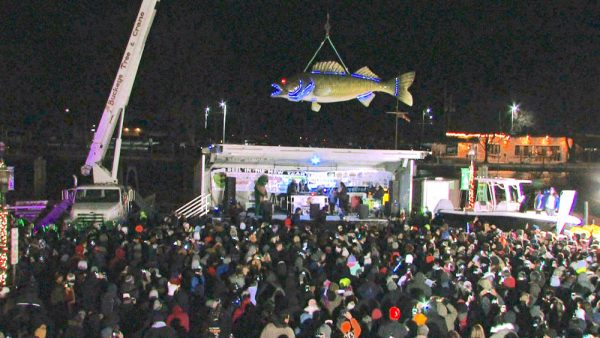 There’s no better way for family and friends to safely party this New Year’s Eve than to gather to enjoy the annual Walleye Drop in Port Clinton, which will be beamed globally in a unique broadcast.

The world’s favorite fish will swim to the streets of Port Clinton for the 32nd time on New Year’s Eve, but this time through the camera magic of Nick James Productions of Port Clinton. That will allow revelers around the globe to also celebrate the arrival of 2021 with a special show featuring Wylie the Walleye.

The new version of Wylie the Walleye is a visual delight. The 20-foot-long, 600-pounder created by Ross Kette of Rain Drop Products in Ashland, Ohio, has a wide array of LED lights that can beam all of the colors of the rainbow. Expect the global show that is being produced to utilize all of Wylie’s capabilities as Wylie welcomes the New Year!

The live entertainment for the show will include the popular local band, Miss Kitty and the Litter.

There will also be a family show on Thursday at noon, beamed from the Ida Rupp Public Library in Port Clinton. A highlight will be Storytime, performed by Ida Rupp Librarians for children 9 and under.

The Wylie Walleye Foundation, which supports the local tourism industry and its many sponsors and charities, will also feature raffles and fundraisers on its Walleye Drop web site, www.walleyedrop.com.