It’s not a pretty sight just yet, but the muck and mire on the Port Clinton shoreline along Perry Street, just east of Waterworks Park, will soon be a model wetlands.

Wetlands has become a buzz word these days, and along Ohio’s North Coast will there will be a visible example in Port Clinton of what a wetlands could and should be in order to complement Lake Erie and help to keep its waters clean.

The $1.2 million wetlands project is in the works along Port Clinton’s Perry Street, and while the 12.2-acre parcel will takes years to complete, the eradication of invasive phragmites is already a key to its value to the environment.

“It’s just very cool to see the wetlands project finally progress,” said Safety-Service Director Olen Martin of Port Clinton. “The project has been in the planning stage for 13 years, so it’s been a long time coming.”

The wetlands will stretch from Derby Pond in Waterworks Park to the Port Clinton Beach, across Perry Street from Lakeview Park. This week, the strip of land appears to be just a muddy mess, with heavy equipment massaging black dirt to get it ready to be planted with native coastal wetland vegitation.

To make sure the wetlands is a success, though, means the eradication of the invasive phragmites that had taken over those shoreline marshes, and blocked Port Clinton homes from enjoying a view of Lake Erie. Eliminating the phragmites is a long process, from using herbicides to kill phragmites and completely removing the plants, especially the tenuous roots of the phragmites.

The native wetlands that will take root in the coming years in the wetlands of Port Clinton will be buffer for protecting Lake Erie and improving its quality of water. Wetlands habitat can remove contaminants, such as the agricultural phosphorus responsible for causing noxious algal blooms around the big lake.

While native wetlands habitat is beneficial to waterfowl and other wildlife, phragmites is not. That is important to bird watchers, waterfowl hunters and casual outdoors folks who enjoy seeing songbirds, eagles, herons, egrets, ducks and geese.

The Corps of Engineers and the Ohio Environmental Protection Agency are the experts helping to create small small versions the 1,500-square-mile Great Black Swamp that existed along the Maumee and Portage river watersheds in the late 1800s.

One of the most ambitious projects in Toledo Metroparks history, the 1,000-acre Howard Farm, is being returned to wetlands habitat. As a recreation hub, the Howard Farm Metropark also has six miles of water trail for canoeing and kayaking and five miles of dike-top trails for hiking adjacent to the Metzger Marsh State Wildlife Area.

It is in a region that includes Maumee Bay State Park, Magee Marsh State Wildlife Area and the Ottawa National Wildlife Refuge. Together, these local, state and federal public lands are known for concentration of migrating songbirds, such as warblers, during spring migration to help host the Biggest Bird Week in American Birding, a social event attracting as many as 100,000 bird watchers. 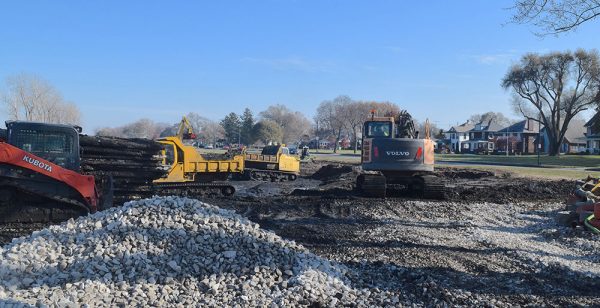