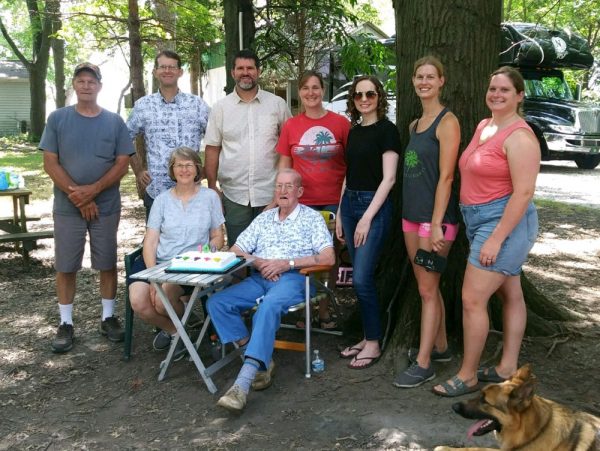 Dick Sneary joins a gaggle of grandchildren in his back yard in Port Clinton. (Photo by D’Arcy Patrick Egan)

PORT CLINTON — Dick Sneary, who kept Port Clinton running right on time for more than three decades, celebrated his 100th birthday at his Taft Street home last weekend with family and friends, and a little help from the Ottawa County Senior Resources.

Sneary and his late wife, Eleanor, kept the small town of Port Clinton humming for more than three decade at Leo Marks Jewelers, his downtown shop. Three stores away he teamed up with Eleanor to operate Sneary’s Clothing Store, a popular shop for 20 years with the young ladies of Ottawa County in the bustling little town of Port Clinton.

A veteran of the U.S. Army, Sneary found himself on a troop ship sailing home from a stint in the South Pacific in World War II, sent back to the states with kidney stones. He remembers avidly watching another solder working in a ship hallway with a box of tools. Sneary spent his time watching him fix watches, the man’s profession as a civilian.

“I had a knack for watch repair, and guy encouraged me to go to school on the GI Bill in Pittsburgh, Pa., when we got home,” said Sneary, who got his degree in 1951. “I became pretty interested in the trade and, while working for a jeweler in Pittsburgh, I heard about job as a watchmaker in Port Clinton.”

He signed on with Leo Marks Jewelers in Port Clinton, and stayed for 34 years.

Sneary also became the watchmaker who kept the Ottawa County Courthouse clock running on time starting in the 1960s. He would climb many steps to check and adjust the inner workings of the clock, which often ran a little fast or a little slow, said Sneary. A regular at service organizations around Port Clinton, Sneary often had members drop off their broken watches at club meetings.

An avid hunter and angler in the sportsman’s paradise of Lake Erie and Sandusky Bay, Sneary also play golf regularly on local courses and would head to Florida each winter just to play golf.

Sneary enjoyed meeting with friends downtown every day for coffee or lunch, with Magruder Hospital’s cafeteria a favorite gathering place. While retired as a watchmaker, Sneary converted the upstairs of his Port Clinton home into a watchmaker’s workshop filled with all of his tools.

“I go into the Moose or Elk, and I walk out with a watch that needs fixed,” he said in a newspaper interview a few years ago. “Everyone knows I repair watches.”