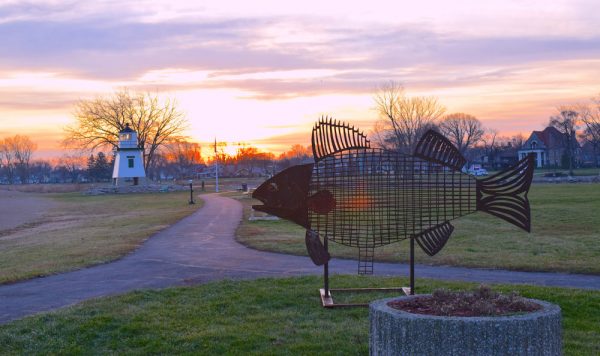 It is rare when a beautiful piece of art has a secondary purpose, other than to delight the people who admire it. The new Port Clinton Fish, designed by artist and art teacher Josh Zetzer, and created by master welder Cody Gabel of Gabel Welding, Inc., both of Port Clinton, has achieved that distinction.

Last Friday, Cody Gabel rolled into Waterworks Park in downtown Port Clinton at the crack of dawn with his second Port Clinton Fish on a trailer, a steel creation designed to complement the ever-expanding park. City crews were waiting to position it just east of the Lake Erie Love sign on the edge of the Lake Erie beach.

Just as importantly, the fish was created to be a receptacle for discarded cans and bottles, which would then be recycled by the Greater Port Clinton Area Arts Council (GPCAAC). The fish were funded by the GPCAAC, with help from the Stensen Fund, the Ottawa County Community Foundation and the Ohio Arts Council.

The inaugural fish — also designed by Zetzer to portray Lake Erie’s favorite fish, the walleye — is at the north end of Madison Street. A third fish is in the planning stages.

Art has become a feature of the Waterworks Park area. This summer, sculptor Andy Sacksteder, formerly of Port Clinton, asked Port Clinton officials if they’d like to display his sculpture, “The Lightkeeper and His Dog” in the shadow of the newly-rebuilt Port Clinton Lighthouse and Boathouse.

The dramatic sculpture was for sale, so it might not be around for long, though.

When local art fans saw it in place, they fell in love with it. Few realized that the “Seafaring Captain and Young Boy” sculpture in nearby Friendship Park was also Sacksteder’s creation.

The city couldn’t come up with the five-figure price tag, so Bill “Popcorn Bill” Yuhasz of the Great Lakes Popcorn Company and former mayor Debbie Hymore-tester rallied a crowd of generous art lovers to cover the cost, and in record time.

Add the Lake Erie Love sign on the edge of the Port Clinton beach, compliments of Lake Erie Shores & Islands and the city, and locals and visitors with cameras and smart phones in hand have resulted in Waterworks Park rivaling the Marblehead Lighthouse on the nearby Marblehead Peninsula as the most-photographed park in the state.