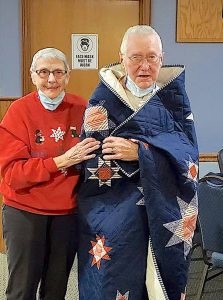 Richard Winke, with his wife, Jeanne, wears a Quilt of Valor awarded at the Port Clinton Elks Club.

Korean War veteran Richard Winke was honored recently at the Port Clinton Elks Club with a special award from the  Quilts of Valor Foundation. Winke was celebrating his birthday with family and friends when he was awarded his quilt.

Winke served in the United States Army during the Korean conflict and received the Silver Star for gallantry in action while serving in Company B with the 32nd Infantry. He was injured in action near Kumwha, Korea and was awarded a Purple Heart, which he received while recovering in a hospital in Osaka, Japan.  He was discharged on Sept. 22, 1953.

Winke was awarded the quilt by Jill Bothe and Mary Gill, members of Grateful Valor Girls, a local Quilts of Valor group. The quilt says unequivocally, “Thank you for your service and sacrifice in serving our nation.”

Veterans can be nominated for the honor and presented a quilt. Visit www.qovf.org.