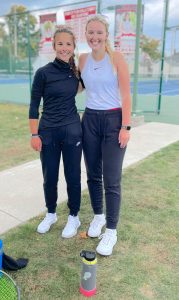 The top four finishers in the D-II singles and doubles brackets have qualified for the state tournament Friday and Saturday, Oct. 21-22 in Mason.

Ruthsatz and Arnold did not lose a set in four matches on their way to a sectional title, the first for Port Clinton since 2010. The Redskins went 4-0 in the sectional at Port Clinton on Saturday to earn a top seed at the district tournament.

Ruthsatz and Arnold knocked off the top-seeded team from Oak Harbor, Emma Hand and Jessa Bolander, 6-3, 6-2 in the semifinals. They defeated Perkins’ Ashi Kota and Katelyn Showalter 6-2, 7-5 in the championship match.