A large group of local and statewide dignitaries and government officials had the opportunity to kayak in the Portage River at the Oak Harbor Interurban Overlook after ODNR Director Mary Mertz designated the Portage River Water Trail as the 17th official state water trail in Ohio on Tuesday, July 19. (Photos by Sheri Trusty)

The lower 12 miles of the beautiful river that meanders from Pemberville to Port Clinton and Lake Erie make it a prime location for recreational boating, canoeing and kayaking. The Ohio Water Trails program was created to promote public awareness of paddling access in the state, and the Portage River Water Trail features a combination of 12 improved and rustic sites where visitors can launch kayaks and canoes, enjoy wildlife and catch a few fish.

Signage listing access locations and facilities were installed along the trail. 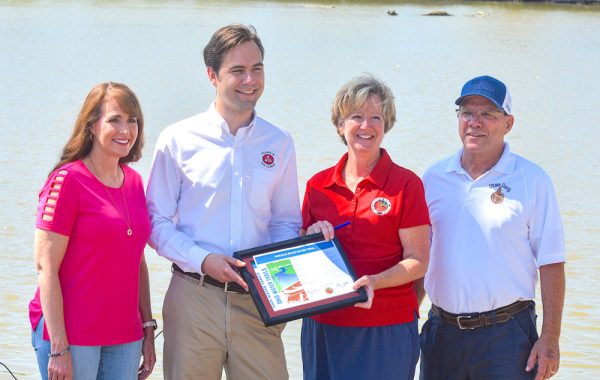 The Friends of ONWR served as the fiscal sponsor of the project.

“We hired a graphic artist to design the signs and brochures, and we purchased them. Then the ODNR reimbursed the Friends of Ottawa National Wildlife Refuge,” said Friends Executive Director Aimee Arent. “Public access is one of our fundamental principles. We are always looking for outdoor recreation opportunities, and this was a cool one we didn’t expect.”

Ottawa County Commissioner Mark Coppeler serves as the chair of the Portage River Basin Council. He said the initial idea for the Portage River Water Trail was first discussed in 2017 and was set to launch in 2020, but was stalled due to pandemic restrictions. He was grateful to see the trail officially designated. 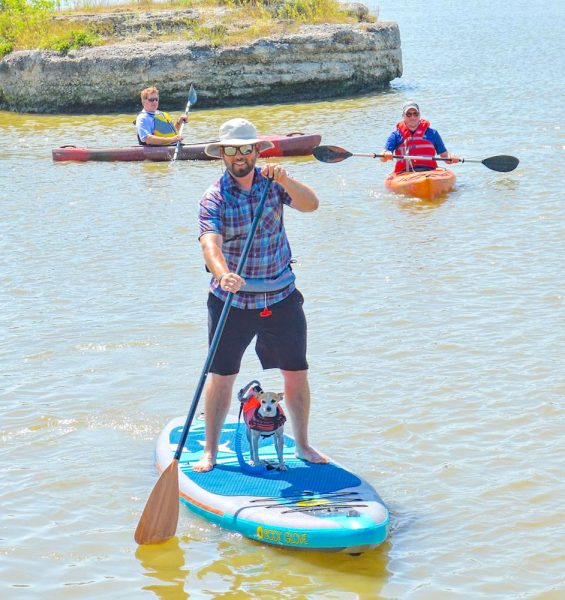 Ohio Department of Natural Resources Statewide Trails Administrator Mark Allen paddle boards in the Portage River with his dog, Cairo. Allen was one of the first people on the water after the Portage River Water Trail was designated as the 17th official state water trail in Ohio at the dedication on Tuesday, July 19. (Photos by Sheri Trusty)

“I’m most excited for the residents. We often hear, ‘You always do things for the visitors,’ but this is something local families can enjoy,” Coppeler said. “It’s great for everyone and for all the little villages along the trail.”

“I’ve been really supportive of the canoe launch. We want to support health and fitness,” Bingham said.

State Sen. Theresa Gavarone, R-Bowling Green, helped secure funding for the project. She attended the designation ceremony and presented a commendation to Oak Harbor Mayor Quinton Babcock, who was grateful the village could offer an access point along the Portage River Water Trail. The Oak Harbor Interurban Overlook is one of the improved access points along the trail and features a paved, ADA-compliant walkway to the river. The trail will create both recreational and economic opportunities for the people and businesses of Oak Harbor.

“This will make our community vibrant and economically diverse,” Babcock said.

Mertz said the Portage River Water Trail will benefit all of the river communities while providing visitors the opportunity to “see an abundance of wildlife and beautiful waters.”

Mertz said she was “personally thankful” to everyone who worked hard to bring the trail to fruition. She is enthusiastic about possible expansion opportunities along the trail in the future.

“This is just the beginning,” Mertz said. “I’m looking forward to seeing where this takes us.”