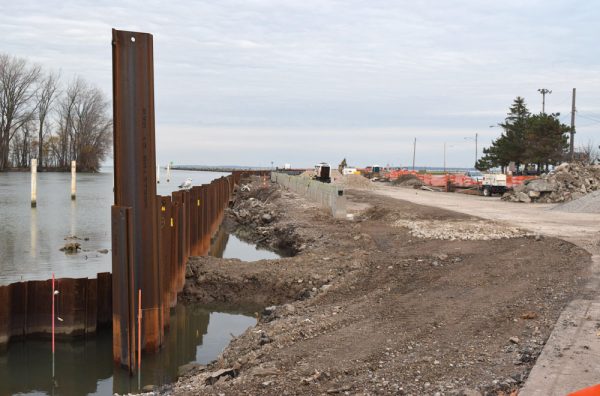 The winter weather is just around the corner, but crews are working this week to meet expectations that the new Portage River Walkway in downtown Port Clinton will be completed in time to dazzle spring visitors. (Photo by D’Arcy Patrick Egan)

When you have a Great Lake such as Erie on your front doorstep, you’ll have plenty of visitors, even with Jack Frost nipping at at your nose at this time of year.

That explains the steady stream of traffic to the north end of Jefferson Street on the Portage River in downtown Port Clinton, where people can access a large, gravel parking lot at Waterworks Park. Some head out to the Lake Erie Love sign on the sandy beach. A few want to catch a wriggling catfish, check out the plentiful Canada geese or just watch the waves roll in.

Many locals making the scene want to check out the Portage River Walkway that is under construction, even though winter weather is arriving, and speculate whether workers will have the $2.3 million project ready for spring visitors. The bank area of the Portage River has been cordoned off where a 900-foot boardwalk will stretch from the north end of Jefferson Street to the jetty at the mouth of the Portage River, which has been the focus of much of the work.

Monday, May 30 is the goal of Port Clinton officials. That is Memorial Day, the traditional opener of the tourism season.

“We’re still on schedule,” said Mayor Mike Snider on Monday morning. “The construction crews will be on the job until the second or third week of December, and then they’ll take a break because of the expected winter weather.

“But the workers will be back in March, and we’re expecting to welcome the early visitors on May 20, just in time for the memorial Day weekend. Everything should be in top shape in June.”