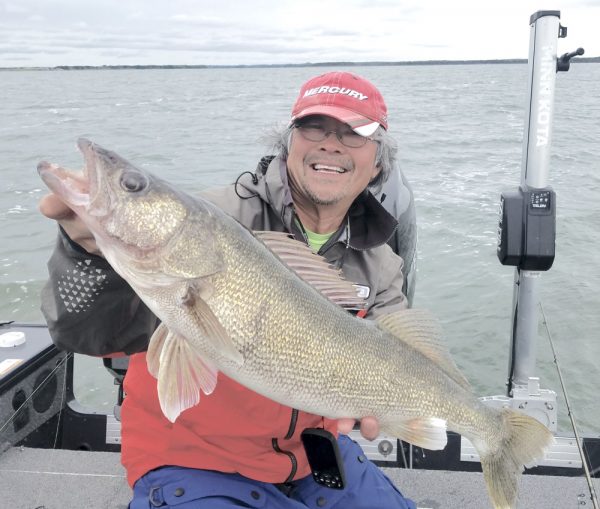 Ted Takasaki of Sioux Falls, S.D. set the national walleye one-day tournament record on April 27, 2002 with a limit of five walleye weighing 53.20 pounds. Takasaki was fishing in a Professional Walleye Trail tournament on Lake Erie at Port Clinton, and feels this could be the year his record is broken.

Lake Erie will be in the spotlight once again on Friday and Saturday (April 16-17) when the national Masters Walleye Circuit comes to Port Clinton. With a record-setting population of walleye to chase, more than 120 pro teams have signed up for the Lake Erie experience.

Lots of local folks will want to see big walleye hauled to the weigh-in scales at the Jefferson Street Pier in downtown Port Clinton. Walleye fans from around the country will be watching live online at masterswalleyecircuit.com or the Facebook page MastersWalleyeCircuit.

The biggest one-day catch ever recorded in walleye tournament may be in jeopardy. Ted Takasaki of Sioux Falls, S.D. weighed in that incredible sack of walleye, a limit of five Lake Erie fish that tipped the scales in Port Clinton at 53.20 pounds on April 27, 2002.

“I was lucky to troll a lure past some extremely big walleye, fish who were really hungry,” said Takasaki by phone recently. “The 53.20-pound catch averaged better than 10 pounds per fish. No tournament catch has been able to match that one-day total almost two decades later.”

Takasaki also remembers that he didn’t win the tournament. The late Tommy Skarlis, 55, who died last September of cancer, won the three-day event with a limit of 15 walleye weighing 138.28 pounds.

‘No tournament lead is ever safe on Lake Erie,” said Takasaki, who is forced to skip the MWC event this week, but will be on Lake Erie off Huron for a National Walleye Tour event on June 24-25.

“I love fishing Lake Erie, and the possibilities for a big catch of walleye,” said Takasaki. “We thought a couple of decades ago that Lake Erie couldn’t get any better, but it has. The walleye numbers are astronomical, and the fishing is spectacular.

“If there is a time when my record could be broken, or the Ohio record of 16.19-pounds set back in November 1999 could fall, this might be the year.”

The MWC weigh-ins presented by Lowe Equipment Attachments will begin at 3:30 p.m. on Thursday and Friday. Tournament director Jeff Kelm said he can’t wait to find out if the experts can figure new or different ways to hook up with trophy walleye, if that is possible.

The MWC two-day tournament weight record was set on Lake Erie on May 5-6, 2018 by the team of Brian Zarembski of Avon Lake, Ohio and Ali Shakoor of Dearborn Heights, Mich.

Kelm doesn’t think one tactic will take a team to victory. He believes the winning team will focus early on catching a solid five-fish limit of big walleye, then change tactics to pull one or two walleye in the double-digit weight range.

“The winner will need one or two of those really big walleye, in the 11- to 12-pound range,” said Kelm. He says many anglers will troll minnow-style lures such as Bandits or the locally-made Reef Runners to catch a big limit, then jig the reefs near the Port Clinton area with blade baits, hair jigs, or Jigging Rapalas for that elusive trophy.

What is rather unique is that MWC officials are also allowing local Lake Erie Walleye Trail fishermen to enter the Port Clinton tournament. While the top pro anglers will be tough to beat, so will the local fishermen who know the spring waters of Lake Erie and the habits of the spawning walleye very well.