Push on to begin community area on Portage River 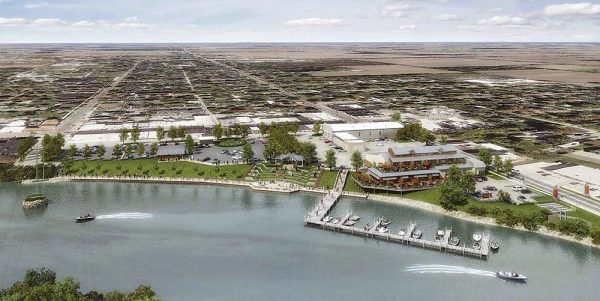 The Oak Harbor Waterfront Master Plan is ambitious, with a riverwalk along the Portage River, an amphitheater for concerts, a shelter house and floating docks.

Oak Harbor has been dreaming of a walkable riverfront for more than 20 years. Now, the project is gaining momentum with the prospect of receiving state funding, according to Mayor Quinton Babcock, local businessmen and community groups around the Village of Oak Harbor.

The proposed improvements for the banks of the attractive Portage River in downtown Oak Harbor have received over 600 letters of support, including letters from The Ability Center of Greater Toledo, The Parks District of Ottawa County, the Ottawa County Republican Women’s Club, the Oak Harbor Lions Club, numerous business owners, and elected officials.

While the idea of a river walk along the Portage River can be traced back to much earlier drawings from 1995, the most recent push to improve Oak Harbor’s Riverfront came from the Oak Harbor Development Group Community Master Plan. This plan, endorsed by the Village of Oak Harbor and Benton-Carroll-Salem School District, outlines a list of high priority improvement projects in the Village.

In August, members of Oak Harbor leadership, including Oak Harbor Development Group Chairman Mike Shadoan and Mayor Quinton Babcock, met with State Senator Theresa Gavarone and Representative DJ Swearingen to get their support for Oak Harbor’s project. In particular, they sought support for including the project in the 2020 State Capital Budget, a biannual state budget that allocates funding to local permanent improvement projects.

“Both Senator Gavarone and Representative Swearingen were very supportive of the project. They immediately saw the impact this project would have on our area and its importance to our community,” said Mayor Babcock.

In order for projects to succeed in being included in the State Capital Budget, they must demonstrate to legislators that they have wide community support. To accomplish this, the Village and OHDG leadership have been gathering letters of support from community members. So far, over 600 letters have been gathered, but they hope to encourage 1,000 to as many as 10,000 letters of support.

“Oak Harbor doesn’t have a lot of voters, as the big cities do. That’s why we need to show that everyone is on board from our entire area said Shadoan.

“I know a lot of people from Ottawa County, and beyond, care about this project and the biggest way we can get it done is by showing Ohio legislators we care, and so do so many others who live and work in this region.”

A letter of support can be completed online at SupportOakHarbor.com, where supporters can also find additional information. If you have any questions, contact Mayor Babcock by email at qbabcock@oakharbor.oh.us