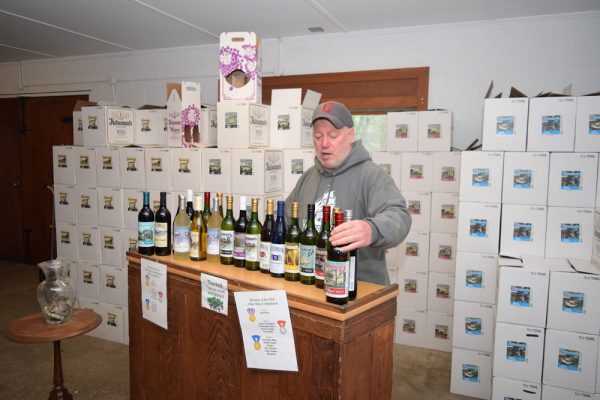 Edward Heineman continued to greet visitors at Heineman’s Winery and Crystal Cave in Put-in-Bay, which experienced one of its most difficult summer seasons this year because of the Covid-19 limitation on crowds and social distancing mandates. The family winery was founded by Gustav Heineman in 1888. (Photo by D’Arcy Egan)

Chamber officials gave special thanks to Jessica Dress, Ray Fogg and Brian Cultice for their time and creative contributions.

“The leisure and hospitality industry was among the first to close its doors, and among the last to open, and was subsequently the hardest hit in the Ohio economy. And yet, our businesses stepped up despite the hardships and lent a hand to those living in our communities,” said Melinda Huntley, executive director of the Ohio Travel Association. “Businesses in the travel industry responded to the crisis through not only shifting focus to supporting local businesses, but also through serving others. The stories collected through the RUBY Award process demonstrate the importance and impact of Ohio’s travel industry during this time.”

Due to the pandemic and resulting shutdowns and limits on capacity, there has been a $10.5 billion loss in traveler spending thus far in Ohio, based on weekly spending reports by Tourism Economics. Resulting job losses exceed all other Ohio industries, with current industry unemployment rates of more than 30%.

Historically, the Ohio Travel Association’s Recognizing Uncommon Brilliance Yearly (RUBY) Awards recognize excellence in Ohio’s travel industry for efforts in advertising, marketing and public relations. This year, the awards focused on two categories: How the industry has served others and how businesses have pivoted during the crisis. The awards are sponsored by Ohio Magazine.

“We at Ohio Magazine could not be more proud of how Ohio’s tourism industry has stepped up to support their local communities while, at the same time, being faced with incredible hardships of its own,” said Lute Harmon, Jr., president of Great Lakes Publishing. “It is a remarkable and resilient group.”