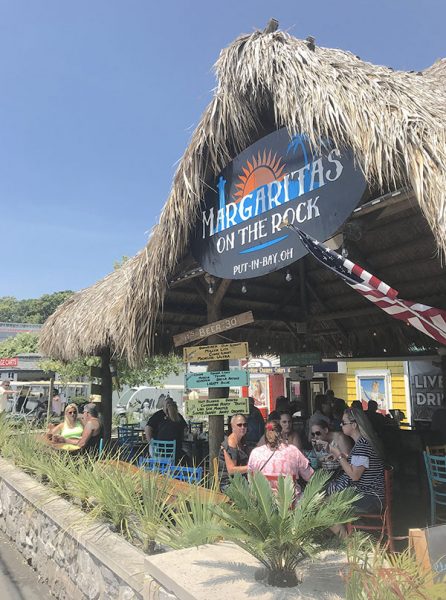 The Village of Put-in-Bay successfully shut down the “Christmas in July” party that caused problems in 2018, putting rules in place for 2019 that allowed the Safe Island Task Force to offer visitors and residents a traditional sunny Saturday of island fun.

Putting the “Christmas in July” celebration that got out of hand in 2018 into its rear view mirror, with the cooperation of the Safe Island Task Force (SITF), the Village of Put-in-Bay enjoyed a typical sunny Saturday of island fun last weekend.

“The hard work certainly paid off,” said Jeff Koehler, editor of the Put-in-Bay Gazette. “Such a dramatic turnabout was a real shot in the arm for a positive island image. Our thanks goes out SITF.”
The “Christmas in July” celebration has not been officially recognized and celebrated since 2013. That has not stopped a Detroit, Mich., charter bus operation from continuing to send people to Put-in-Bay on the last Saturday of July, continuing the rowdy parties.

New traffic flow plans were put in place by the Put-in-Bay Police, which were designed by Police Chief Steve Riddle. Special duty officers were present throughout the downtown, directing traffic and establishing a visible presence.

Along DeRivera Park in the center of the village, Delaware Avenue was closed early on Saturday, allowing it to become a casual walking area, rather than a gridlock, as in 2018. The closure reduced golf cart and taxi congestion from years past. By 2 p.m. on Saturday the standard traffic flow was restored.

As the day went along, said Island Ambassador Peter Huston, Director of the Put-in-Bay Chamber of Commerce, the island traffic looked and felt like a normal Saturday afternoon. Chamber of Commerce “Ask Me” volunteers handed out island maps and answered island questions. Michael Bell, former mayor of Toledo and a member of SITF, said “on a scale of 1 to 10, the day was a 10.”

Huston said the island and its activities got great reviews from the two tour groups on Saturday, an Amish church group from Indiana and a charter group of 150 people from the Detroit area. The island tour train, Perry’s Victory and International Peace memorial and other island attractions seemed to enjoy a strong day of visitation, too, said Huston.

It took a lot of planning. Local business owner and resident Brad Ohlemacher held meetings throughout the year to handle a myriad of issues and possible solutions to better manage Put-in-Bay’s peak visitation days.