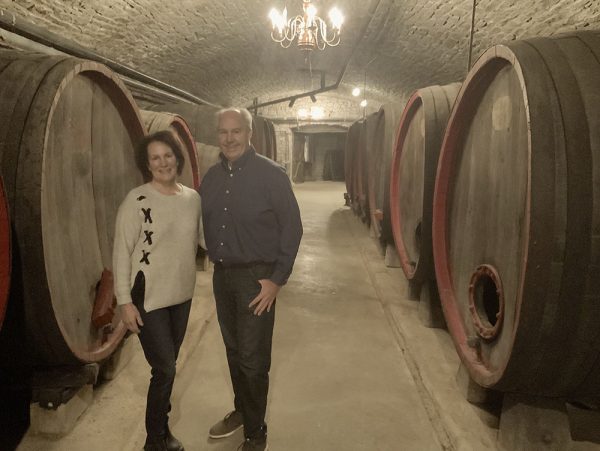 Quintin and Donna Smith tour the historic wine cellars at the Mon Ami Historic Restaurant and Winery. The Smith family will sponsor a new “Windows in Time” display featuring Mon Ami Winery and the Vineyards and Winemaking Exhibit at the Catawba Museum at Union Chapel.

Quintin Smith’s interest in grape growing and wine production on Catawba Island has surpassed even his recent acquisition of the Mon Ami Historic Restaurant and Winery in Port Clinton. Smith and his family have elected to sponsor the Vineyards and Winemaking Exhibit at the Catawba Island Historical Society’s Union Chapel Museum.

The Smith family’s participation is part of the Museum’s “Windows in Time” naming rights program sponsorship of prominent display sites on the Catawba Peninsula.

Ten “Windows in Time” locations were initially offered by the program, each requiring an investment of $10,000. Seven of the 10 exhibits now have tasteful bronze plaques honoring the sponsor or the sponsor’s designee to identify locations that have been selected.

There is no admission charge to visit the Museum. Interest and dividends from the conservative investment of “Windows in Time” funds are needed to cover costs like research, design and mounting the displays. The current Vineyards and Winemaking Exhibit location is one of the most educational and entertaining in the main gallery.

“The role of grapes was key to the economic prosperity of Catawba Island for several decades beginning in the 1850’s,” said Craig Koerpel, President of the Historical Society. “Once Nicholas Longworth, often called the Father of American Winemaking, had proven in Cincinnati that the domestic Vitis labrusca genus could make an excellent fermented beverage, Fox Grapes — so named for their musky aroma — made their way north to the shores and islands of Lake Erie.”

Three commercial wineries opened on Catawba. The first belonged to Benedict Furrer and was located at the junction of West Catawba Road and East Porter Street. The second was the Owen Wine Cellar on North East Catawba Road. The last was a cooperative of local grape growers called the Catawba Island Wine Company, which later became Mon Ami.

By the late 1870’s, however, the local wine industry was in serious decline. Competition from other parts of the nation, plant disease, and residual labor shortages from the Civil War had all taken their toll.

Catawba growers, however, discovered they could grow and market some of the best peaches in the country. Orchards began to replace arbors.

After nearly a century and a half of modest activity, it appears the fortunes of wine production on Catawba Island may be preparing for an encore performance. Drawing upon experience he has gained cultivating fruit orchards to supply his Twin Oast Brewery, Smith now plans to both raise and purchase grapes for producing wine in the antique stone cellars of Mon Ami, one of the largest and oldest wineries east of the Mississippi River.

“We intend to make more than just a very good wine,” said Smith. “Our goal is to include some Catawba heritage and tradition in each bottle. We’ll do that, in part, with what we’ve learned about early island winemaking from the Historical Society’s Union Chapel Museum.

“Becoming a ‘Windows in Time’ sponsor — particularly for the wine exhibit — is our way of expressing appreciation for the value the Museum offers us and the community as a whole.”

Catawba Museum at Union Chapel is currently closed for the season. It will reopen in May. More information is available on the Historical Society website, www.catawbaislandhistoricalsociety.com