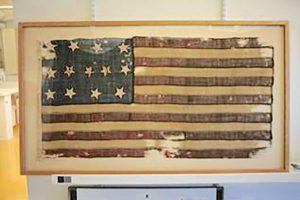 Helping to display an extremely rare 13-star American flag from the Revolutionary War era on Flag Day at Flag City U.S.A. in Findlay, Ohio were local members of the Mooney Family of southern Ohio, Heather Tietjen Mooney and her husband, Jim Mooney of Marblehead.

On Flag Day, June 14th, one of the country’s oldest and rarest flags will be put on exhibit for public viewing in Flag City USA (Findlay, Ohio) at the Hancock Historical Museum, thanks to help from Heather Tietjen Mooney and her husband, Jim Mooney, of Marblehead.

The flag will make its debut on Friday, June 14 and be on display at the Hancock Historical Museum through July 5.

There are very few 13-star American flags left in existence, and this is the only one of its kind available for public display. The Revolutionary War-era flag is owned by the Mooney Family of Southern Ohio, and has most recently been on display at the National Underground Railroad Freedom Center in Cincinnati.

The flag is believed to have been used during the Revolutionary War at Ft. Independence in Boston. Renowned textile expert Dr. Rabbit Goody has analyzed the Mooney family’s flag to authenticate the date of construction. Goody said the threads, weaving techniques and sewing techniques used in the construction of the flag are consistent with those used in the late 1700s.

She said the flag’s shape, appearance, wear and oral history are consistent with other flags surviving from the late 18th century. She believes the Mooney flag to be authentic and her findings were confirmed by textile expert Dr. Irene Good at Harvard University’s Peabody Museum. Die testing results have further affirmed Dr. Goody’s conclusions.

The road to Findlay becoming designated Flag City, USA began in 1968, when John B. Cooke moved to Findlay. As a member of the Sons of the American Revolution, Cooke believed in the value of flying the American flag and went door-to-door in town asking residents and businesses alike to fly a flag on Flag Day, June 14, 1968. Cooke created a fund and purchased 14,000 small flags for the community. This project continued until 1974, when the Women’s Division of the Chamber of Commerce started a campaign to once again have flags fly and to have the city of Findlay become officially known as Flag City USA.

The women enlisted the assistance of U.S. Rep. Tennyson Guyer to champion the cause. On May 7, 1974, the House of Representatives passed a resolution officially declaring Findlay, Flag City USA. A Flag City monument now welcomes visitors to Findlay at I-75 and U.S. 224, pass under the Flag City USA designation while driving on I-75, or pass the mural on a Marathon Petroleum storage tank. Findlay is a place of great pride, both in its unique designation and patriotism.

A special reception unveiling the Mooney Family flag will take place on June 14 at the Hancock Historical Museum at 10:30 a.m. Findlay’s Mayor Christina Muryn, and James Mooney, of the Mooney Family of Cincinnati, will be in attendance.

The reception is open to the public. The Hancock Historical Museum is located at 422 W. Sandusky St., Findlay. Following the June 14 reception, the flag will be available for viewing during regular museum hours, Wednesday-Friday at 10 am-4 p.m., and Sunday from 1-4 p.m. through Friday, July 5.