Rawski steps away after 11 years at Oak Harbor 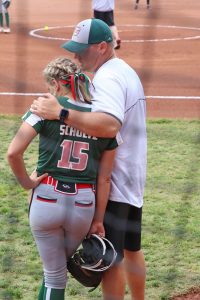 “Leave something better than you found it,” was Chris Raaski’s motto.

When Chris Rawski took over the Oak Harbor softball program, it wasn’t in very good shape. And Rawski’s first year saw the Rockets win just nine games, but anyone observing how the team played knew that good things were on the horizon.

After 11 years — and 10 seasons — leading Oak Harbor, Rawski has decided to step away to spend more time with his wife, Alisa, and their two kids, Morgan and Wyatt.

“I have a daughter that plays softball, and Wyatt runs track, so I’m going to try and be there a little more,” said Rawski, who teaches English to seventh graders at Genoa Middle School. “It’s hard to do when you’re coaching.”

He gives a great deal of credit to Alisa, who took care of the kids during softball season.

“She takes everything in stride and takes care of everything for four months a year,” Rawski said. “When you have a partner like that, it makes it easier to be a coach.”

“I think those first couple teams, the players that were willing to embrace some of the things we were teaching — they built the foundation,” said Rawski, who leaves with a 206-90 record, good for a winning percentage of .696. “But they didn’t necessarily get to experience the benefits, but what they did to help the program was so important.”

Rawski had high praise for Rathbun, a catcher, and Bergman, who was a pitcher for two years before moving to right field, for helping put the program on the map by winning four sectional titles, two league championships and one district title as seniors in 2017.

“Maddy and Emma tried out for all of the travel teams and they were the catalysts for helping set the bar for the other players,” said Rawski. “Those players helped build the program. People realized you do have to do a little more if you want to be great.”

The Rockets, led by the senior trio of Reagan Schultz, Remi Gregory and Sydney Overmyer, reached the pinnacle this season, winning 24 games and capturing the program’s first regional championship. Oak Harbor had to fend off a furious rally by Lexington in the regional final, edging the Lady Lex, 5-4. (The Rockets’ season ended with a 5-0 loss in the Division II state semifinals to Plain City Jonathan Alder.)

Oak Harbor’s first sectional title under Rawski came in 2014 when Rathbun and Bergman were freshman, and the second one, a 2-1 victory over Willard in 12 innings in a Division III sectional final the next year really seemed to jump start the program. In the bottom of the 11th inning with the Rockets facing a 1-0 deficit and two outs, Petersen lined a double to left and Rathbun brought her home with a single. In the 12th, Tessa Tyburski executed a suicide squeeze to score Riley to win the game.

“We built on something every year after that. I think Emma Bergman pitched her tail off in that game. That’s the game you can point to and say, ‘We can build off this.’ Some people don’t really talk about sectional championships, (but) we always talk about that,” said Rawski. “When you win a lot, people forget about those first couple steps. You can’t go anywhere if you don’t win that sectional title.”

Rawski had some great pitchers during his tenure. Durivage was his starter in his first two seasons, Bergman started for two seasons, Riley worked out of the bullpen as a freshman and was the starter for her final three seasons while Schultz, who was a three-year starter, led the Rockets to the Final Four.

Brian Schultz, the father of Reagan, coached with Rawski for five years.

“The coaching staff that Chris assembled wasn’t going to be out-worked. He was the ultimate head coach. We were very well prepared going into every game,” Brian Schultz said. “The guy was relentless in his preparation. If a decision had to be made, he would always run it past the other coaches. He poured his heart and soul into the program and it has paid huge dividends.

“I’ve had a great time. Getting to coach my daughter for four years and getting to coach some of the girls that I coached up through the program, it was awesome watching them come up and grow and become the great softball players that they were. Coach was a big part in that, he was there all the way. Going to Florida was a great way for the team to bond and that was all him. The winning also helped, too.”

Reagan Schultz talked about what it was like playing for Rawski.

“Coach Rawski hasn’t been only a coach but also such an inspiration to me. He taught me so many things each and every day for four years,” Schultz said. “He has taught me hard work, perseverance, how to believe in yourself and much more. I wouldn’t be the person I am without him, and I know he has touched many other lives and he has touched mine.

“Coach Rawski always had high expectations and pushed us to be the best we could be. Some may say it’s intense, but we made it so far. Without his drive to push us, we wouldn’t be the program we are today.”

She also talked about bringing the community together during the tournament run.

“Even though we were losing, it was so heartwarming to look up and see all the red and green in the stands,” Schultz said. “It was enough to make me emotional seeing so many people from the community coming together.”

Brian Schultz talked about what Rawski did for his daughter.

“Coach has been a very important part of Reagan’s journey. He has believed in her ever since she started coming to recreation games for 10 and under,” he said. “Coach has sacrificed so much to get this program where it is today. He has set the standard very high for the next coach to come in and deliver.”

Rawski leaves with seven sectional titles, three district championships and one regional title. The Rockets reached the district final in six of his 10 seasons.

“He came in and there was some talent (in Oak Harbor), but it was sort of untapped (potential),” said Kontak. “He brought in a philosophy of having good athletes with some softball talent being held accountable, putting the ball in play on offense and being accountable to the standards he had set.

“The common denominator at Genoa and Oak Harbor, whether it was softball or basketball,” Kontak said, “was that you bring great energy, hold your players accountable and have a great passion competing for your school.”