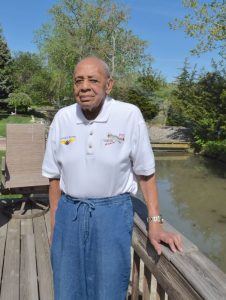 Harold Brown, 97, was a fighter pilot, and still considers himself a Red Tail, one of the last remaining members of the famed Tuskegee Airmen of World War II. (Photo by D’Arcy Patrick Egan)

When Harold Brown graduated from high school in Minneapolis, Minn., the 18-year-old had the wild idea of learning to fly and become a fighter pilot for the U.S. Air Force. It was a dream much like that of Emilia Tolbert, a young Black woman who wants to keep the heritage of the Tuskegee Airmen alive.

Brown, who is Black, succeeded at the Tuskegee Institute, a rare place where Black pilots achieved their training and fought heroically in World War II. Brown still considers himself, first and foremost, a noted “Red Tail” and has been recognized on a national stage.

Tolbert is featured in the recent documentary “Red Horizon,” and both Tolbert and Brown, 97, one of the few Tuskegee Airmen still alive, will tell their stories and answer questions about why there are still so few minority pilots.

Brown, who lives on the Catawba Peninsula in the Port Clinton area, will appear in person at Liberty Aviation Museum, 3515 East State Rd., Port Clinton on Tuesday, May 24 at 10:30 a.m. Tolbert will chat on Zoom to the audience, with the pair providing their thoughts on the past, present and future of minority pilots.

Seating is free, but limited in Liberty Aviation Museum’s main hangar. Contact James Priebe at 440-781-9618 for reservations, or visit eventsa@libertyaviationmuseum.org.

“Red Horizon” is a short film, and a trailer can be found at redhorizonfilm.com. Its purpose is to inspire Black women and men to take to the skies and change the radical imbalance of Black pilots. The film centers around a cast of dedicated students at Tuskegee University who have benefited from the Red Tails Scholarship Foundation.

“In 2021, only 3% of commercial pilots are Black or African-American. That certainly doesn’t match the 15% minority share of the U.S. population,” points out Priebe, a publicist for the Liberty Aviation Museum.

Three years ago, two optimistic United States military fighter pilots – Brigadier General William Sparrow and Lieutenant Colonel Richard Peace – saw the imbalance in the world of aviation. The Red Tails Scholarship Foundation they created is a one-of-a-kind flight school in Tuskegee, Ala. It resides on the hallowed ground of Moton Field, the original training ground of the Tuskegee Airmen.

Its purpose is much larger than teaching students how to fly. It teaches students communication skills, self confidence, team work and, most of all, it’s showing the world the future of Black equality.