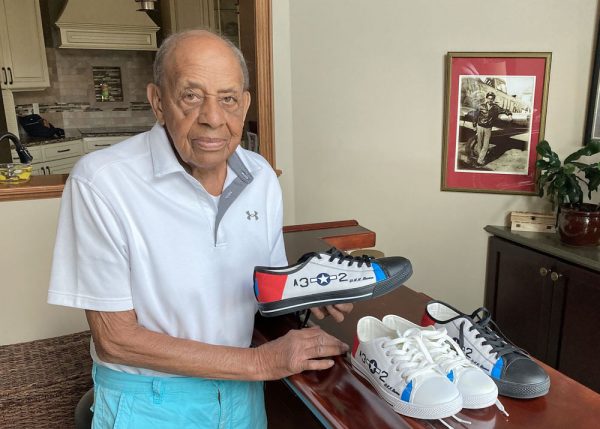 Harold Brown, resident of Catawba, is one of only eight remaining Tuskegee Airmen still alive today, and the Commemorative Air Force (CAF) Red Tail Squadron has honored one of its own with signature brand tennis shoes. The tennis shoes have a full canvas double-sided print of his P-51 Mustang fighter aircraft number 32, the Army Air Corp symbol, and Brown’s signature.

It has a classic look, with a red heel to commemorate the Red Tail Squadron.

Born Aug. 19, 1924 in Minneapolis, Minn., as a youngster he had a burning desire to become a pilot. Brown became an integral member of the 332nd Fighter Group better known as the Tuskegee Airmen or “Red Tails.”

He was shot down over enemy territory on March 14, 1945 during his 30th mission. After bailing out of his badly-damaged P-51 Mustang, he was captured and sent to a prisoner of war camp. On April 29, 1945, Brown and other POWs were liberated when General George Patton rolled into the camp in a tank.

Returning home after the war, Brown retired as a Lieutenant Colonel after 23 years of active duty service. Brown attended Ohio State University, earning a bachelor’s degree in Mathematics, and later earning a master’s degree and Ph.D. in vocational-technical education from OSU.

Brown would become Columbus State Community College’s Vice President of Academic Affairs, facilitating the community college’s growth from 500 students to nearly 9,000 students over the next two decades. Brown later founded Brown & Associates, an educational consulting firm he ran for 26 years, until he was 88 years old.

After celebrating his 97th birthday a few days ago, he is still going strong.

Keen-eyed and mentally as sharp as a tack, Brown moves like a much younger man, and has the energy of a man half his age. 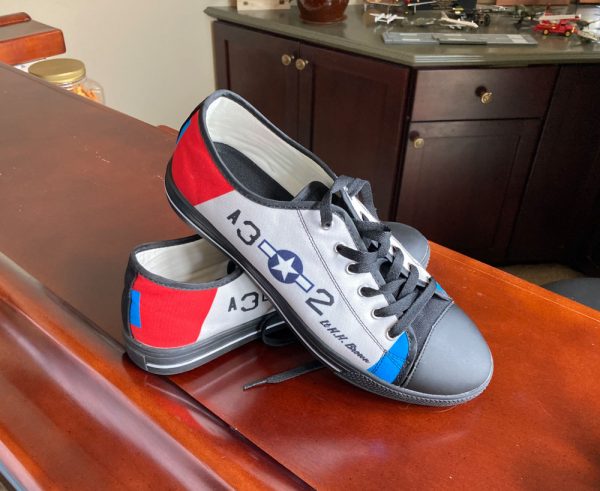 A pair of Harold Brown’s tennis shoes shows the number of his plane, Army Air Force symbol, and Brown’s signature on the side.

Proceeds from his signature brand tennis shoes go to supporting the “RISE ABOVE” Traveling Exhibit, a 53-foot mobile movie theater featuring two compelling original short “RISE ABOVE” films that tell the story of the Tuskegee Airmen.

In addition, a fully-restored WWII-era P-51C Mustang, the signature aircraft of the Tuskegee Airmen, is part of the exhibit.

“The whole idea was to take it [the plane] to air shows, and show youngsters they could become anything they wanted to be,” said Brown, “You can achieve anything, any dream that you are big enough to dream.”

The CAF Red Tail Squadron, now known as CAF RISE ABOVE, is an organization committed to telling the inspirational story of the Tuskegee Airmen, America’s first black military pilots and their support personnel.

Said Brown, “It takes money to show the plane at air shows. Hats, jackets and shoes are money raisers to support that mission, to offset the cost.”

Their goal is to educate people of all ages about the Tuskegee Airmen, important American icons who displayed their strength of character and ability to triumph over adversity. Their efforts are designed to inspire others to rise above obstacles in their own lives and achieve their goals.

For more information about this organization, or to purchase the tennis shoes or other memorabilia, go to https://store.cafriseabove.org/.

NOTE: PBS will present a 4-part broadcast, THE AMERICAN VETERAN, on Oct. 26-Nov. 16 from 9-10 p.m. Every voice in the program is that of a veteran, providing a bridge between Americans who have served in the military and those who have not. Harold Brown is one of the featured participants.