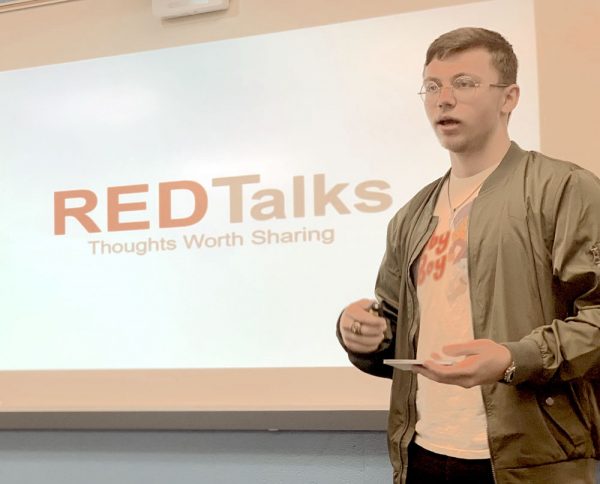 Senior Mark Phillips of Port Clinton High School is featured at a special RED Talk at the Performing Arts Center on Tuesday, Nov. 10 at noon. His talk will be “The philosophy behind the smile.”

“This has been a crazy year, but one thing hasn’t changed at Port Clinton High School,” said Language Arts and Speech teacher, Joe Miller. “Our students have big ideas and important things to say.

“Now, more than ever, they need to have a voice. And this year, students will again get to hear from community members and leaders.”

TED Talks that feature outstanding speakers and short, powerful talks. The RED Talks will resume at the PCHS Performing Arts Center on Tuesday, Nov. 10 at noon, with senior Mark Phillips presenting a short talk entitled “The philosophy behind the smile.”

“I am excited to just be able to show people that happiness is a factor that you can control,” said Phillips. “I want to do this by referencing philosophers and introducing their methods to my peers and community members to hopefully guide them in a better direction.”

Phillips will be followed by 12:30 p.m. by Port Clinton military veteran Bert Fall, who will talk about “Today’s Citizen Soldier.” Fall will cover balancing a civilian life and a career in the Ohio National Guard.

The talks are generally between 8 and 15 minutes, and followed by a Q & A session.

There will also be RED Talks on Thursday, Nov. 12 at noon at the Performing Arts Center. Featured will be senior Sydney Moore on “How accepting others can lead to a better humanity.” He will be followed by Port Clinton Mayor Mike Snider, with the topic “What if you asked yourself ‘What if?’”

All RED Talks will take place in the Performing Arts Center with a small, socially-distanced audience wearing masks. They will also be recorded live for those who cannot attend.