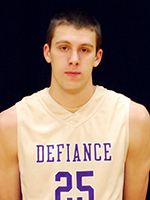 “We are excited to have Ryan as our head coach.  Ryan was part of a very successful program here as a player including being the most valuable player on the 2010 State Runner-up Redskin team,” said Superintendent Patrick Adkins.  “Our players are excited, and we look forward to that excitement carrying over to the basketball court.”

Hicks weighed a slim 180 pounds during his senior season as a Redskin, and enjoyed visiting his mother at work. She was graphic designer for The Beacon newspaper in Port Clinton.

Adkins also said that Lucas Kennedy has been named the Redskins’ girls varsity basketball head coach. Kennedy served as an assistant coach for the team, and is an assistant football and baseball coach.

He is also familiar to the Port Clinton High School program, serving as an assistant coach for the Redskins’ girls basketball team.

Hicks takes over for retiring Von Graffin and Kennedy for Toby Bickel.

“I am filled with a great amount of excitement, pride, and gratitude to be named the new Port Clinton Redskin girls basketball head coach,” said Kennedy. “I wear the name of Port Clinton on my chest with great pride. This is a school district and city that I am proud to work for, and I consider it a blessing to be a part of this family of dedicated teachers and coaches.

“Our girls will work hard to serve as an example of what it means to be a Port Clinton Redskin.”

Adkins said the Kennedy has been an important member of the Redskins sports staff over the past four years.

“He will bring enthusiasm and passion to the program, and is committed to creating a winning culture, which is very important to us. Our girls are looking forward to playing for him.”

The coaching candidates were interviewed by several different panels as part of the selection process.  Two interview committees, one for boys basketball and one for girls basketball, made up of Port Clinton administrators, staff, parents and community members narrowed done the field of candidates to two for each team.

Last Saturday, said officials, candidates were interviewed in two separate groups, meeting a panel of parents and then a panel of next year’s players. Input from players and parents helped to determine the selection of both Coach Hicks and Coach Kennedy.

“I’m beyond excited and eager to start my journey as the head coach here in Port Clinton,” said Hicks. “I’d like to thank the administration for this opportunity and thank everyone who has supported me these past three years. Now, I am ready to get in the gym and get to work with our kids.”