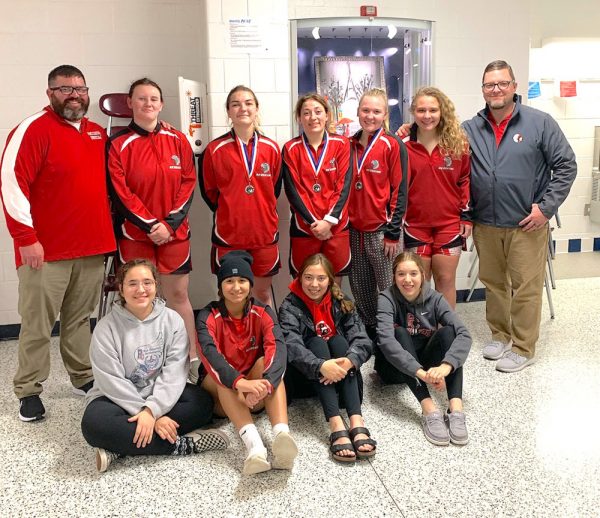 Those are the members of the first-ever Port Clinton girls wrestling team.

The team had a good showing in its inaugural event, the Mapleton Girls Wrestling Invitational, as three girls finished first and two more placed second.

Wallace, Rohrer and Reeves each took first in their respective weight classes, and Whitaker finished second and Perry was third.

“There were a lot of positive things to take away,” said Port Clinton coach Adam Hicks. “They got a lot of mat time and they responded well.”

Hicks is in his first season coaching the team. He came over from New Philadelphia, where he was the assistant wrestling coach for 10 years. Hicks, who will work as a resource intervention specialist at the high school, was also the Quakers’ strength and conditioning coach and coached football, too. When he got to Port Clinton, Wallace — who wrestled with the team last season, — was the lone female wrestler.

“We started our first-ever girls team in Port Clinton High School history. When I got here in July, Cadence was the lone girl. We were trying to figure out what we could do to make practices better here, and then more girls got interested,” said Hicks. I went to the state football clinic and they gave me some advice.”

For now, Hicks just wants his girls to invest their time and efforts in getting better each day.

“Our biggest goal is mat time,” he said. “It’s kind of hard to find all-girls tournaments within a close range. We’re trying to prepare them for the postseason. We have a district and state tournament through the Ohio High School Wrestling Coaches Association. Our sole focus is getting girls to the state tournament. Cadence has made things easy for me (in leading the way). We’ve set pretty high goals for them.”

Thus far, Hicks likes what he’s seen out of his wrestlers. Their ability to focus and see the task at hand has been a surprise.

“These girls show up, they don’t back down. They go to the weight room,” he said. “It’s not girls or boys wrestling in the room, it’s a wrestling thing. They can go as far as they want.”