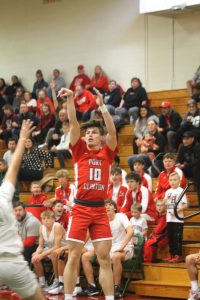 Port Clinton’s Jackson Beasley (10) fires from long distance in a basketball thriller over Oak Harbor, 50-49. Beasley and Adam Thorban each scored 20 points in the victory. (Photo by Kristi Hittepole)

Both Port Clinton and Oak Harbor were supposed to be pretty good basketball teams this season. Friday night, the matchup between the County rivals didn’t disappoint as the Redskins pulled out a 50-49 win in the Sandusky Bay Conference opener for both teams.

The Rockets led through much of the game, but Adam Thorbahn and Jackson Beasley did what they needed to do at the end.

The Redskins were down by five late in the fourth quarter, but went on a 13-3 run led by Beasley and Thorbahn to cut the lead then take the lead.

The Rockets had several opportunities late, but were unable to make shots and Port Clinton had the victory.

The Redskins were led in scoring by Beasley and Thorbahn, both with 20 points each. Oak Harbor’s Ethan Stokes led all scorers with 21.