Redskins lose a thriller to Huron in final seconds, 27-26 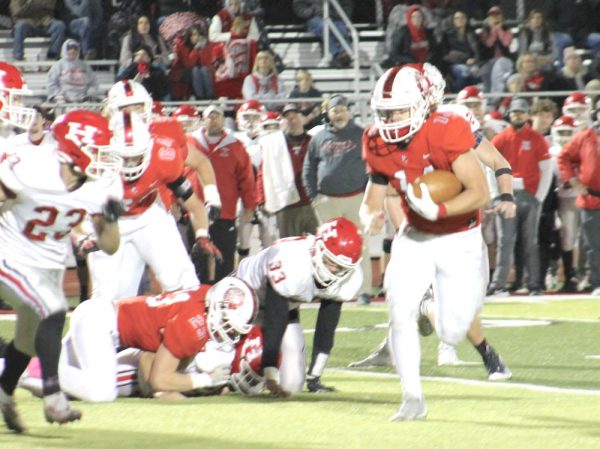 It was one of those “back and forth” Sandusky Bay Conference games last Friday night with Huron making the final statement with a late field goal to pull out a 27-26 win over the Port Clinton Redskins.

It was a game of big plays and outstanding performances by both teams, as Huron’s Cam Manners ended it with a field goal with just under a minute left in the game, erasing a 26-24 Port Clinton lead and turning it into a 27-26 victory for the Tigers.

As the score indicated, the two teams were relatively equally matched coming in, and it showed. The Redskins got hit by adversity early in the game, as Huron turned a Port Clinton fumble into a fourth down, 28-yard touchdown pass to put the Tigers on top 10-0.

Statistically, the Redskins had it going offensively. Cam Gillum was 22 of 28 in passing for 260 yards and a touchdown, a 66-yard beauty to Adam Thorbahn. Running back Dagan Meyers ran for 108 yards on 28 carries with three touchdowns.

The Redskins had four touchdowns in the game but missed on two extra point attempts.

The loss to Huron puts the Redskins at 5-4 overall and 2-2 in the SBC Bay Division. They will have to lick their wounds quickly, as a road showdown with Ottawa County rival Oak Harbor looms this Friday. The Rockets have already clinched the Bay Division Championship with their win over Willard last Friday. Using Huron as a measuring stick, the Rockets beat Huron by one point on an overtime 2-point conversion. The Redskins lost to Huron by one on a late field goal.

Friday night’s rivalry game ought to be a good one!