In 2021, there were a number of firsts for area players, teams and coaches. 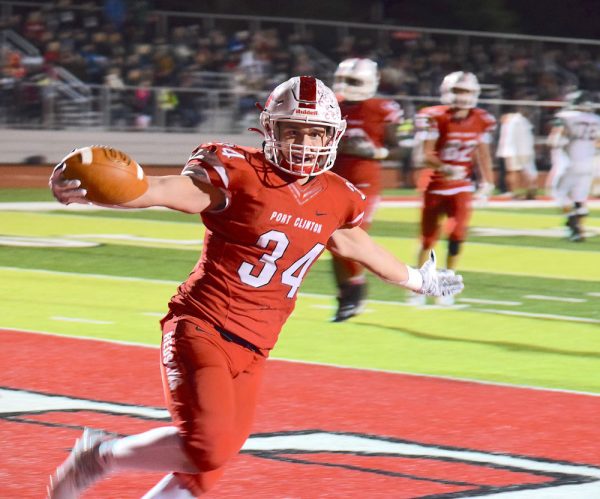 Before 2021, Port Clinton had won two playoff games in school history. This season, the Redskins won four games in the postseason and claimed the first regional championship in program history with a 49-21 win over defending Division IV state champion Van Wert.

Port Clinton running back Garrett Cornell rushed 30 times for 206 yards and two touchdowns and defensive back Cashes Jackson finished with four pass breakups, an interception, a forced fumble and a touchdown pass off a trick play. Quarterback Cam Gillum completed 12-of-21 passes for 174 yards and a touchdown and an interception and rushed 16 times for 57 yards and his three scores. Josh Hurst had seven catches for 119 yards and two touchdowns and Tyler Webb finished with four catches for 80 yards.

Port Clinton’s season ended with a 34-15 loss to Youngstown St. Ursuline in the state semifinals, but it couldn’t spoil the most successful season in school history.

Four players earned all-Ohio honors in Div. IV for the ‘Skins. Hurst was the Sandusky Bay Conference Bay Division Player of the Year and a first team wide receiver. Webb was first team as a defensive back. Gillum was second team and Ethan Ranzenberger honorable-mention on the offensive line.

An undefeated season culminated in a state wrestling championship for Oak Harbor’s Wyatt Miller. The senior went 48-0 and won the Division III title with a pin of Westfall’s Starr Kelly just before the buzzer in the first set. He won his first match by fall and the next two by major decision to advance to the finals. Miller is the first wrestler in Ohio to not allow an offensive point against him in a season on the team since fellow Rocket J.D. Bergman, who had a stellar career at Ohio State, accomplished that feat in 2003.

As a team, Oak Harbor finished 11th in Div. III with 33 points, yet another impressive showing for one of the state’s best programs.

Miller is another wrestling star in the lineage of the Miller clan, five of whom have won a total of six state titles. Tait, Wyatt’s father, was a state champion; Ian, his cousin, won a championship; Chad, his uncle, won a title, and Ferd, another uncle, won two championships.

Andrea Sorg’s 18th season as coach of the Oak Harbor boys and girls swim teams was one of her most memorable. The girls team won the first district championship in the program’s storied history and one week later, finished fifth at the Division II state tournament.

Sorg’s girls and boys teams have won six league titles apiece and become one of the top programs in northwest Ohio. A 1999 graduate of Oak Harbor, Sorg has seen great swimmers like Elayna Krupp and Michael Cervantes have great success under her guidance.

One of the area’s best tennis coaches, Rick LaFountain was rewarded for his efforts when he reached an incredible milestone and notched his 500th victory with Oak Harbor.

LaFountain began coaching at Oak Harbor in 1992 and has coached both Rocket teams in two stints. He also coached the boys team at Fremont Ross for 11 years and the girls team for four years.

One of the highlights for LaFountain came when he oversaw a Little Giants boys team that won three consecutive Great Lakes League titles from ’97-’99. One of his best players, Pete Scranton, qualified for the state tournament in 2000.

In a storied history that dates back three decades, Oak Harbor had its program’s best season.

The Rocket swim team won its first district championship and followed that up by finishing fifth in Division II, the highest finish for a public school in the state last winter. 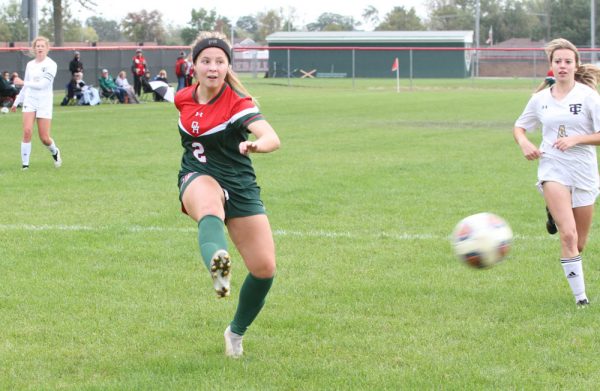 Hannah Schulte finished her career as one of the most decorated players in Oak Harbor soccer history. (Photo by Julie Overmyer)

Hannah Schulte finished her career as one of the most decorated players in Oak Harbor soccer history. The senior finished with 103 career goals, just four short of the record held by Erica Lipstraw. Schulte earned second-team honors in Division II and was also named the Sandusky Bay Conference Bay Division’s Player of the Year.

Schulte helped Oak Harbor win its fourth district championship by scoring a goal in the Rockets’ 2-1 win over Wauseon.

Schulte, whose brother, Clay, was one of the finest football players in school history, will continue her soccer career at Wheeling University, a Div. II college located approximately 60 miles southwest of Pittsburgh.

Danbury senior golfer Grayson Clark had an incredible season, one that will stand out in school and area history for its brilliance.

Clark, who is the only golfer in Laker history to qualify for the Division III state tournament, finished tied for 19th out of 72 golfers. He shot a +21 on 36 holes, a 75 followed by an 88 for a total of 163 strokes at The Ohio State University Scarlet Course.

It was yet another in a long line of accomplishments for Clark.

He had a great season and was the medalist at the Ottawa County Meet and the Clyde Invitational and was a four-time Most Valuable Player on the team.

Clark credits his parents for exposing him to the sport at a young age, as well as his brother, Gavin, a sophomore who advanced to districts himself.

Oak Harbor basketball coach Eric Sweet took over a program that had fallen on hard times, but it’s safe to say he’s rebuilt the program.

For his efforts, Sweet reached an impressive milestone and won his 100th career game when the Rockets defeated Bellevue, 53-38, on February 6 behind 26 points from Blake Booker.

A 62-27 record over the last four seasons to go with a league title and sectional championship has lifted the Rockets to heights not experienced in two decades, a testament to the work of Sweet.

Sweet coached for two years at Old Fort before coming to Oak Harbor in 2009. He was an assistant for two years before taking over and is in the midst of his 11th season leading the Rockets.

In the most dramatic of circumstances, Oak Harbor won yet another district championship. With 17 seconds remaining, Remi Gregory scored the final goal in the Rockets’ 2-1 win over Wauseon in a Division II district final.

With just seconds remaining, Hannah Schulte, who was about five feet from the goal, couldn’t quite control the ball off a save, but Gregory got the rebound and scored.

Schulte scored the first goal of the match with 30:06 on a high shot that eluded Indian goalkeeper Madison Strain, but Wauseon’s Abby Smith scored 15 seconds later to tie the score.

It is the fourth district title for Oak Harbor, and second in three years. It marks the 13th time in 19 years that the Rockets have advanced at least as far as the district finals. Oak Harbor also won the Sandusky Bay Conference Bay Division title for the third consecutive season.

After not inducting any members into the Oak Harbor High School Hall of Fame for 17 years, the ceremony honoring the finest Rocket athletes and coaches resumed. Fittingly, the 2021 class was probably the finest in school history. The greatest athlete in school history, J.D. Bergman was inducted, as was Pat Kania, the only Rocket to ever earn all-Ohio honors in three sports, and the great coach, Gary Quisno.

Bergman was an all-Ohioan in football at running back and went 86-0 during his final two years in wrestling while winning two state titles. He wrestled at Ohio State and was a three-time All-American before becoming one of the best wrestlers in the world, winning the U.S. Open twice and nearly qualifying for the Olympics in ’12. He was also a five-time USAW University national champion and a six-time USAW University All-American.

Quisno, played tight end at Miami (Ohio) University for teams that went 32-1-1 from 1973-75, won three Mid-American Conference titles and three Tangerine Bowls, was the Oak Harbor football coach for 29 years and won 224 games. His teams made it to the playoffs eight times, won two regional championships and eight league titles.