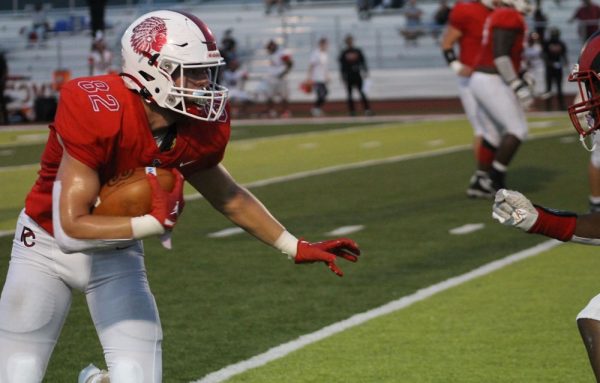 Port Clinton tight end Adam Thorban (82) rambles with a pass in a 47-16 victory over Toledo Rogers on Friday night. 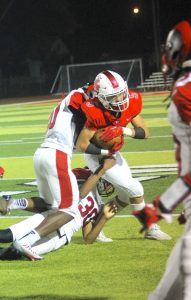 Back in the 60s, 70s and 80s, when Port Clinton High School was a member of the Great Lakes League, one of their most powerful league rivals was Toledo Rogers. Wins were rare back then.

Today, however, it’s a different story. Just two weeks after going into the locker room for halftime down 49-0 against Perkins, it was the Redskins who held a 47-0 advantage over the Rogers Rams at halftime and coasted to a 47-16 victory.

In the first half of the game, Port Clinton dominated their old Great Lakes League rival to up their season record to 3-2 overall.

The second half of the football season now gets very interesting as the Sandusky Bay Conference’s Bay Division season gets going in earnest. This Friday night, the Redskins travel to Milan and a date with the Edison Chargers, who won big last Friday night over rival Norwalk.

The Chargers went 5-5 last season, losing to Port Clinton by a 31-0 count. They did make it into the State Playoffs and pulled off a shocking 23-22 win over Bellevue in the first round. Bellevue was the No. 1 seed in the region and Edison was the No. 16 seed. This year, they feature a strong running game and a very experienced junior quarterback in Marcus Medina.

Just like Perkins, there is little doubt the Chargers remember the 31-0 drubbing Port Clinton delivered last season. This one could get interesting.