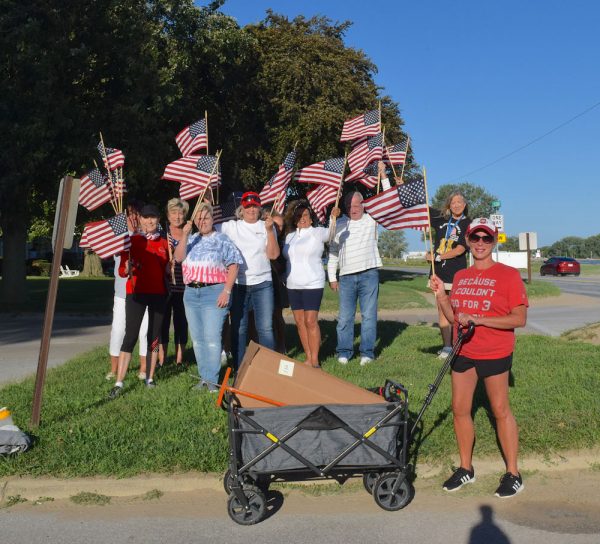 The long, long line of American flags put in place for Labor Day holiday by the Ottawa County Republican Women’s Club last Thursday under the direction of President Toni DeLuca is special this year. To mark the 20th anniversary of 9-11, the terrorist attack on the World Trade Center, the flags will remain through Saturday, Sept. 11 for a public celebration of the Catawba Island Township Veterans Memorial Highway at noon that day at the intersections of Sloan and Crogan streets at the Catawba Point. (Photo by D’Arcy Patrick Egan)

As you drive down Perry Street in Port Clinton this week and see the long line of American flags along the roadway, take time to remember the deadliest terrorist act in world history that happed on the fateful morning of September 11, 2001, and how it profoundly affected our nation 20 years ago.

Reporter Phil Wheeler has interviewed men and women from around the area in recent days to capture their memories of that tragic morning (See Here). They recall being shocked, scared, sad and mad — and felt it a life-changing experience.

As we mark Saturday’s 20th anniversary of the horrors our nation watched on our television sets as airliners crashed into the World Trade Center, always remember the attacks resulted in 2,977 fatalities, over 25,000 injuries, substantial long-term health consequences, and at least $10 billion in infrastructure and property damage.

It remains the single deadliest incident for firefighters and law enforcement officers in the history of the United States, with 340 and 72 killed, respectively.

The citizens of Port Clinton have long known such tragedies. In 1942 during World War II, 32 of the National Guard troops from Port Clinton Company C, 192nd Tank Battalion, were captured by the Japanese in the Philippines. Forced to march more than 65 miles through bug-infested, steaming jungle on the subsequent Bataan Death March to a concentration camp, all but 10 died from a lack of food and water, or were executed.