Rep. Arndt sworn in as state representative for third term

State Representative Steve Arndt (R-Port Clinton) was sworn in to his third term as a member of the Ohio House of Representatives during last week’s House session in Columbus. He represents the 89th House District.

“I am humbled by the trust placed in me and grateful for this opportunity to continue serving the communities of the 89th House District,” said Arndt, who hails from Port Clinton. His district encompasses Erie and Ottawa counties.

By serving his third term in the Ohio House, Arndt is building on a well-established career in public service. Arndt has been primarily focused on economic, workforce, healthcare, Lake Erie and education initiatives and legislation in the Ohio House.

Arndt was an Ottawa County Commissioner for 27 years, sitting on various different committees throughout his tenure, including the Jobs, Economic Development, and Infrastructure Committee.

He has been involved with the Northwest Area Office on Aging, which covers nine counties, the Port Clinton Chamber of Commerce, Elmore City Council, and other local government entities.

Arndt has also been a small business owner for over 30 years. He has spent time volunteering with several organizations, including the Boy Scouts of America and the Knights of Columbus.

Steven has been married to his wife JoAnne for 44 years, and have two children. 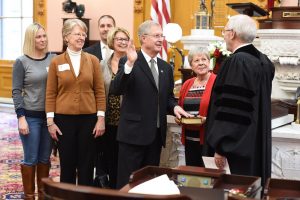