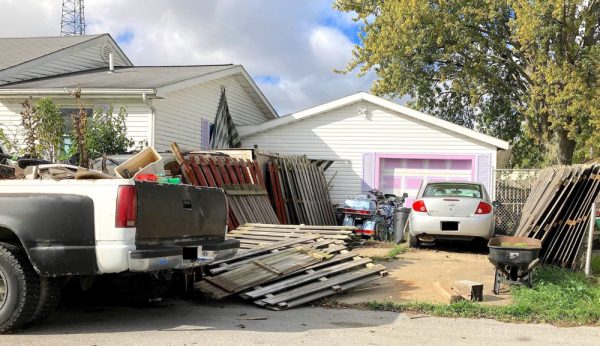 An old pickup truck, its bed filled with garbage, sits in front the house. Wooden pallets are piled around the Port Clinton home. (Photo by Phil Wheeler)

Port Clinton Mayor Mike Snider has established a task force to raise awareness of the issue of blight in the city.

“Blight comes in many forms, in my mind,” said Mayor Snider. “There are obviously dilapidated structures, but there are also overgrown weeds and high grass, and people putting furniture on the curbside. I drove around Sunday, making stops all over the city, and I stopped counting at 51 trash cans still sitting out on the curb. It may be a minor thing, but some still had trash overflowing.

“That’s not fair to the other people who live in our city.”

Not only does it look bad, but it can also lead to certain health issues. The Center for Disease Control (CDC) has identified key environmental factors that affect our well-being. The link is clear and compelling. The concept of healthy homes extends beyond the four walls of a dwelling to include its surroundings—to the land immediately around the house, to adjacent structures and amenities.

Safety Service Director Tracy Colston said that “what we want to do is make people aware.

“A couch sits on the curb. It isn’t automatically picked up any more. It could sit there for weeks.”

The task force is jokingly referred to as the “Sunday Blight Brunch” because of the meetings that have been taking place at the Mayor’s home over breakfast.

The city is compiling a list of blighted properties, and will be reviewing existing legislation on the issue.

The Mayor’s task force will approach the issue in two ways. Potential assistance could be offered to those who choose to address a problem on their own property themselves. The task force will also look into tools available to the city that can otherwise remedy a situation not addressed by the property owner.

One positive impact seen already is that, since the first initial discussions began, some of the instances of blight have been taken care of.

“There are 3,200-plus properties in the city of Port Clinton, and we are really only talking about 100,” said Mayor Snider. “We want property owners to take pride in their properties, and to be proud to be a resident of Port Clinton. We just want to raise awareness.”

Once the task force has completed its review, it is anticipated that a comprehensive package addressing it will be brought before the Port Clinton City Council.

To find out more, or to report a problem, go to www.portclinton.com/contact-us/.