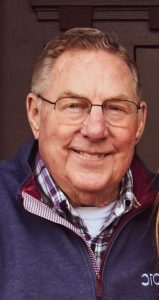 Richard is also survived by his cherished granddaughters, Sophia Markley, Troy, Emma Coffin, and Kinsey Coffin, both of Pleasant Hill, CA. In addition, he leaves behind his younger brother, David Coffin (Joann), Avon Lake, and brothers-in-law, Doug Nelson (Lu Ann), and Dane Nelson (Kristin), both in Adrian, MI, as well as many treasured nieces and nephews. We also cannot forget to mention his ever-faithful companion, Gus, his dog, who rarely left his side.

Richard and Karen started their married life together in El Paso, TX where he was stationed in the Army. After serving his country, they moved to Bellevue, WA, where Richard worked for Boeing Aircraft. Once their son Steve was born, they decided to move back to Ohio to be closer to family. Here, Richard spent the majority of his career working as an Industrial Engineer for Uniroyal. During this time, he also served as an assistant to the PCHS Boy’s Golf team as well as a golf instructor for BGSU’s continuing education program.

After retiring, Richard volunteered with Stein Hospice, as well as Mobile Meals, and the Firelands Presbyterian/United Way Food Pantry. He served as President of the Ottawa County American Cancer Society when the 1st Ottawa County Relay for Life was held. He was also the first president of CASA (Citizens Against Substance Abuse). As an active member of Firelands Presbyterian Church, he served as a Pastoral Deacon, Stephen Minister, and Financial Secretary.

Funeral services for Richard will be private. A celebration of his life will be held at a later date.

Online condolences may be shared with the family at www.walkerfuneralhomes.com