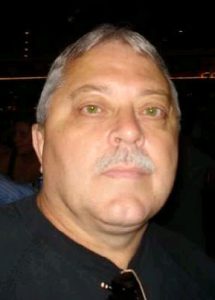 On Tuesday November 24, Rick Basinger—husband, best friend, soul mate, father, grandfather and friend—was taken to heaven to join his best friend Harley. We had to say goodbye, but how does one do that?

Rick was 67, it was a long life, but not near long enough.

Rick was brave from the day he was born till the very end.

Rick had been battling Frontal Temporal Dementia for the last 5 years and was admitted to a nursing home this July 2020 to help assist in that battle.

There is so much to say about this amazing man but finding a way to you condense such a full life into a few paragraphs is extremely challenging.

Rick was born in Toledo, where he started his journey in life. He lived there with his brother and sister until they moved to Sandusky with their mother and stepfather, Bob, eventually moving to Catawba where the next chapter of his adventures began.

He would go adventuring to California where he raised his 4 beautiful children and had a successful roofing company.

Rick and family moved back to Ohio to continue their adventures closer to family.

After moving back to Ohio Rick began working in resort sales and mediation. This job took him across the country and added more adventures to his repertoire.

This job introduced him to his beautiful wife Pauline. Their family grew and more adventures unfolded.

One of those adventures found Rick and Pauline right at the beginning of their marriage. They found themselves enjoying a rather expensive Cheeseburger in Paradise at Jimmy Buffets for dinner. These cheeseburgers came on platters with song lyrics around the edge. Rick suggested they stop by the gift shop after to buy some of the plates because he was very fond of them, but sadly they were not available to buy. Rick was rarely denied what he wanted. The next time they were there Rick made sure Pauline took a large purse and that platter found itself in Pauline’s purse. This may or may not have happened 1 or 2 more times. If anyone else happens to be there, though, they are one plate short of a set.

Rick loved his family and loved sharing his children’s and grandchildren’s stories and accomplishments to anyone who would listen. He was so proud!

Rick also loved motorcycles, fishing, golfing, billiards, watches, socializing and adventures. Rick was full of adventure and had the best stories whether you were part of that story or it was a story shared.

Rick impacted every one of us that loved him. A little bit of Rick lives on in each of those he loved. We are the people that we are today for having known him and are blessed to have had him in our lives.

Rick, you will be missed.

Till we meet again.