Ricky Crawford, of Lakeside Marblehead, born on Nov. 14, 1963 in Port Clinton, to Flora L. and the late Gomer T., passed away at age 55 on Dec. 30 in Sandusky from complications related to his cancer treatment.  Ricky graduated from Danbury High School in 1982 and proudly served his country in the United States Air Force from 1982 to 1986.

He was a machinist and welder by trade.  Ricky was preceded in death by his sister JoAnn. He is survived by son, Chris (Misty); grandchildren, Aubry, Braxtyn, and Aryonna; mother, Flora; brothers, Nick and Harold; and many, many nieces, nephews and friends.

He was always known for his positive outlook on life and his great sense of humor.  In his spare time, he loved spending time fishing, hunting, and going to turkey shoots. A private graveside service and memorial will be held at a later date. 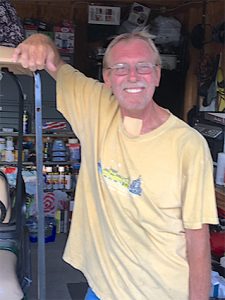