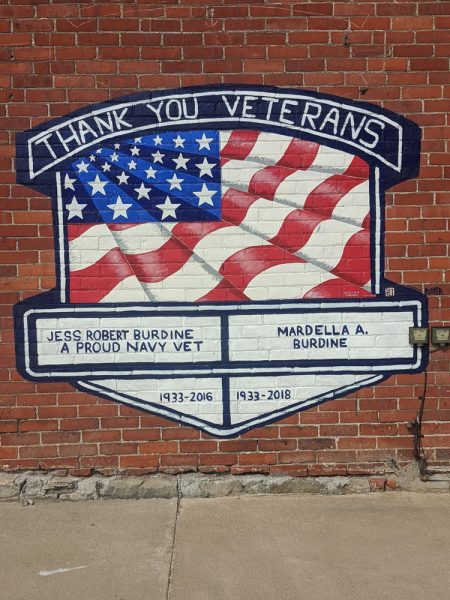 Ottawa County has wrapped up its annual Labor Day celebrations, and veterans will gather this weekend to mark the 20th anniversary of terrorist attack on New York’s World Trade Center on Sept. 11, 2001. Artist Matt Ritter of Port Clinton took it upon himself to enhance a Veterans Mural in the Village of Oak Harbor.

Ritter, whose art has become a full-time occupation this summer, decided to raise the bar on the Veterans Mural on the brick wall of the Burdine Building in downtown Oak Harbor.

“My dad was very patriotic, as were so many in this area,” said Laurie Burdine, who owns the building, which has a dozen resident apartments and retail shops. “He wanted to enlist, but when he graduated from high school, the Korean War had just ended.

“Oddly enough, my dad was drafted before he could enlist, and decided to volunteer for the U.S. Navy. He and my mother had married, and had raised six kids — five boys and me,” she said.

Ritter said he’s not a military veteran, but has great appreciation for our veterans.

“Like so many others, I have to tip my hat to the men and women who fought for our country,” he said. “It was an honor to redo the Veterans Mural, especially with this week’s 20th anniversary of the World Trade Center attack.”