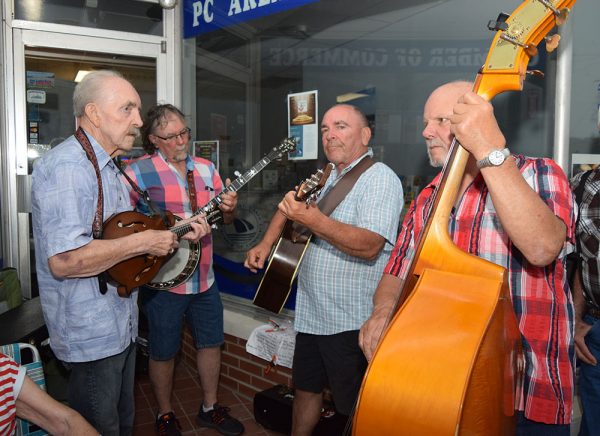 The famed Ottawa County Bluegrass Band did not let a little rain shower dampen their spirits, or a night of bluegrass music last Friday on Madison Street ini Port Clinton, the inaugural Riverfront Live! of the summer season. After covering up their musical equipment when the rain and wind arrived, the foursome retreated to an alcove in the front of the Port Clinton of Commerce offices and had their fans dancing. From left to right are Joseph “Papa” Mitchell Sr., Joseph Mitchell Jr. and Dennis Mitchell of Port Clinton and Vern Brink of Gibsonburg. (Photo by D’Arcy Egan)

The music was scheduled to begin at 6 p.m. as Riverfront Live! kicked off its summer of Friday night music concerts, and last Friday’s event was special. With the regular venue at the north end of Jefferson Street on the Portage River in Port Clinton plagued by high water, the Port Clinton Chamber of Commerce went uptown.

Director Nicole Kochensparger and city officials had decided to block off northern Madison Street, turning it into an open air dining and drinking spot. The area was also a great spot for local entertainment like Riverfront Live!

But rain and electric guitars don’t mix well, and at 6 p.m. a micro-storm swept through the area, forcing the Ottawa County Bluegrass Band to cover their equipment and head for the nearest awning.

The disappointment didn’t last long. The initial crowd waiting for them to play headed for the pubs and taverns, and the Ottawa County Bluegrass Band ducked into the alcove in front of the Port Clinton Chamber of Commerce, taking along guitars and banjos. As soon as the first wave of rain passed through, the band lit up with a selection of their impressive sounds.

The band has been a mainstay all around Ottawa County and the region, and they didn’t disappoint. They also agreed that they would hang around.

“When the rain goes away, we’re going to stay,” said Joseph “Papa” Mitchell Sr., whose sons, Dennis and Joe Jr. and Vern Brink of Gibsonburg were real troopers.

The band and city officials agreed that the show should go on, and they entertained the crowds from 8 p.m. until midnight.

Riverfront Live! Friday concerts will feature Candy Miller on June 12, John Davenport on June 19, Jai Marina on July 3, David Ninke on July 10, John Pickle on July 24 and the Walleyes on Aug. 7. Other acts will be announced soon, and the concerts will be held every Friday through Aug. 28.

Because of the MORA laws, concertgoers are allowed to purchase drinks at the local bars.