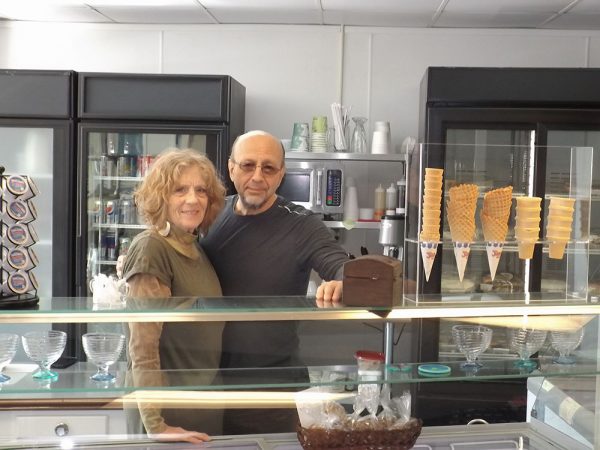 Ray Porrello and Julie Miller have created RJ’s Ice Cream & Desserts on the corner of Jefferson and Second street in Port Clinton, a cozy place to enjoy a cone or a slice of Mama Jo’s pie, and kick back with a little jazz. (Photo by Philip Wheeler)

At the corner of Jefferson and Second street in Port Clinton sits the Jefferson Building, and its newest tenant, RJ’s Ice Cream & Desserts. Owned and operated by Ray Porrello and Julie Miller, the old-fashioned ice cream shop is an eclectic place to stop and smell the roses.

The décor is comfortable, with mismatched tables and chairs arranged around a central seating area, where you’ll find board games to play and trivia books to browse. One wall contains the food and ice cream area. Tucked in an opposite corner are Porrello’s drums. Pictures on the wall celebrate his career as a professional musician.

“It’s a cozy place. Nothing really matches. We have people that come in for a quick coffee and slice of pie, and stay for an hour.” said Miller.

Ice cream from Toft’s is the headliner. Pies from Mama Jo’s, a third-generation, family-owned business located in Amherst, Ohio, are a big hit. The menu has soups and sandwiches, including fancy hot dogs and gyros. Chili is available by the cup or bowl. Prices are inexpensive. At $6.50, the gyro is the most pricey item on the menu. Beverages, from coffee or tea to soda, are also modestly priced.

Ray Porello is the ‘R’ in RJ’s, and has been a professional drummer since he was a teen. At 18, he tried out for Count Bassie’s stellar band, but a car accident and ruptured spleen sidelined him.

“I really wasn’t ready to play for him, anyways,” said Porello. “A year later, Count Bassie recommended me to Sammy Davis Jr.”

Sammy’s drummer asked Porello to play for the band in Lake Tahoe. Porello performed in a set that went quite well, and he was hired. Brief highlights of his career include eight years playing for Sammy Davis Jr., playing in the house band at Caesars Palace in Las Vegas, and with The Micky Finn review. He played for Sammy on ‘The Sammy and Company’ TV show. He still plays locally with the band “The Avenue.”

Julie Miller, the ‘J’ in RJ’s, has interesting stories of her own. At the age of 10, Miller moved from Fremont to Seattle with her mother, grew up in the Pacific Northwest, and married. In the ‘90’s, the couple bought a sailboat and spent the next eight months being weekend sailors.

Finally, they sold all their possessions and switched to the live-aboard life. Moving to Texas with the sailboat, they finally decided to leave everything behind and spent the next 14 months traveling the Florida Keys, the Bahamas, and on to New York, sailing the offshore and inter-coastal waterways.

Miller sold the boat and moved back to Port Clinton to be near her mother and father. She fell in love with the Wednesday night jazz at Slater’s Madison Street Pub. While she says it was the jazz that kept her coming back, Porello was the band’s drummer, and the couple has been together the last six years.

Two years ago, Porello rented a a vacant ground floor area of the Jefferson Building where he could set up his drums and practice. Miller liked to hang out there, as well, and the couple decided to rent the whole space. They considered opening a pizzeria, but it would have been difficult to get the permits for an oven, so they decided on ice cream.

“There were pizza places downtown, but no ice cream parlor.” said Miller. “Ray really liked Momma Jo’s pies, so that kind of entered into the decision. There are a couple of customers who said that they would drive to Amherst for the pies, and are really glad they don’t have to now.”

If you are looking for a place to battle the winter blues, enjoy a dish of ice cream or piece of pie, or have a leisurely lunch, check out RJ’s. It won’t take much time to see that the owners are as warm and inviting as the eatery they run.