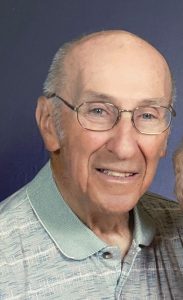 Robert George Hartman, 88, of Marblehead, died May 8, at home under Stein Hospice care. He was born on March 24, 1934, in Sandusky, the son of the late George and Balbina Rose (Nesselhauf) Hartman. He married Mary Louise (Sotak) Hartman of Lakeside on Aug. 25, 1962, and she survives.

Bob graduated with the class of 1952 from Sandusky St. Mary’s where he excelled in math and science. Bob could not play sports because of a medical condition but was the score keeper for the basketball teams. He was active in the Boy Scouts and was an altar server through his school years. He served his tool and die apprenticeship at the former New Departure bearing plant in Sandusky. Bob worked at New Departure, TRW, and retired from the former Kelsey Hayes plant in Fremont in 1997 after 27 years as a tool engineer.

Bob was a member of the Marblehead Lighthouse Historical Society where he served several terms as president and vice-president. For many years, he and Mary spent many hours every summer enjoying the lake, lighthouse visitors, and the other volunteers. He was a past member of St. Mary Byzantine Church where he was active with the building committee for the church and social hall. Many years were enjoyed playing dartball with the St. Mary’s and St. Paul’s Lutheran dartball league. Bob always owned a boat and enjoyed fishing for perch and walleye, taking friends and family for “scenic tour” rides, and fish fries for all. He was active with the Boy Scouts, his sons’ and grandkid’s sports activities and being the best dad and grandpa any kid could ever have!

Bob is survived by his wife Mary and their three sons and their wives: Trent (Emmy) Hartman, Thomas (Susan) Hartman, and Todd (Peggy) Hartman; five grandchildren: Nathan, Becka, Katelyn, Karrie, and Clayton; four great-grandchildren: Knox, Kensley, Owen, and Kyah; and many nieces and nephews. Preceding him in death were his parents and four sisters and brothers-in-law, Catherine (Albert) Beier, Esther (John) Hanley, Mary (Urban) Beier and Ruth (Alfred) Uhl. His mother and father-in-law, Joseph and Mary Sotak and his brothers-in-law John Sotak and Claude Boyd.

Visitation will be 2-4 p.m. and 6-8 p.m. on May 16 at Neidecker, Crosser & Priesman Funeral Home and Cremation Services, Peninsula Chapel, 7755 E. Harbor Rd. Lakeside-Marblehead, with a rosary being recited at 3:45 p.m. Visitation will also be from 9 a.m. until the Mass of Christian Burial at 10 a.m. at St. Joseph Catholic Church with Fr. Brown officiating on Tuesday, May 17. Interment will follow at St. Mary’s Cemetery, Main St. Marblehead. Memorial donations can be made to Stein Hospice, Marblehead Lighthouse Historical Society, St. Joseph Church, St. Mary Church, or one’s favorite charity. Online condolences may be shared with the family at www.neideckercrosserpriesman.com.