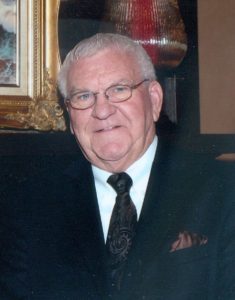 … Is what he requested his obituary read. Thankfully, we have the last word! Bob passed away peacefully at his home on April 3, surrounded by his beloved family.

Robert J. Snyder (Bob) was born in Fremont on March 16, 1946 to Louis S. Snyder and Gertrude E. (Beier) Snyder. After his graduation from Clyde High School in 1964, Bob moved to Port Clinton (Catawba Island), where he met and married the love of his life, Linda (Krempa) Snyder.

It was in Port Clinton that Bob realized his dream of entrepreneurship for the first time, taking over the Catawba Garbage pickup. He then worked alongside his father at LS Snyder & Sons Construction, eventually growing the business and taking over the day-to-day operations from Louis. Over the next 55 years, Bob worked as a contractor and developer of various businesses and organizations, and he served his country as a member of the National Guard.

Bob was proud to be instrumental in the development of the Nor Easter Club. He owned the Catawba Leasing Company, and previously co-owned Riehl Manufacturing Company, Port Clinton Prop Repair, Cedarlane Campgrounds, and Catawba Mid-Way Marina. Bob went on to develop Catawba Mini & Heated Boat Storage, The Marsh’s Edge subdivision, Catawba Bay subdivision, and the expansion of the Sutton Center.

Behind the scenes, Bob was extremely active in the community, and believed that his God-given purpose was to leave the world a better place than he found it. A life that touches others goes on forever, and Bob touched and improved many lives during the 75 years he was with us. He was a generous donor of his time, resources, and ingenuity, and had a deep love for his community.

Bob served as past president of the Chamber of Commerce and was previously a member of Huntington Bank Advisory Board, and Bay Park Hospital Board. One of his most gratifying endeavors was working with the United Way to implement the Caring and Giving Community program. There are currently four United Way Caring and Giving Communities: Falling Waters, Fairway Villas, Marsh’s Edge, and Catawba Bay.

In 2011, Bob and Linda founded the Portage Resale Center (PRC), a community organization based on Christian values, benefiting Ottawa County charities and offering quality, low-cost merchandise to all in need. To date, the PRC has given over $781,000 back to Ottawa County.

Bob was an active member of the Port Clinton Knights of Columbus, where he was a past Grand Knight and financial secretary. He was a member of the Elks, Port Clinton Yacht Club, Catawba Island Club, Nor Easter Club, and the Colonial Club.

Strong in his Catholic faith, Bob and Linda regularly attended services at Immaculate Conception Church and St. Joseph’s in Marblehead.

While business was his passion and life-long hobby, Bob also enjoyed spending time on the lake. He loved to boat and passed that love on to his children. He liked to spend his spare time reading and talking politics with his friends over lunch.

Bob resided in Catawba Island with his wife of over 51 years, Linda L. (Krempa) Snyder. They raised two wonderful children, Brian J. (Jana Meisler) Snyder of Catawba, and Erica E. Snyder of Gilbert, Arizona, and Bob’s altruistic legacy will forever live on in the hearts of his grandchildren, Zach and Dylan Speer, and Layla Snyder.

Bob was greeted in heaven by his mom and dad, and his sisters Mary Fox and Carol Weikel – we can only imagine the Easter celebration they must have had when he arrived, just in time for his favorite holiday! He is survived by his brother Jim (Connie) Snyder, and older sister Jeanne Walter, along with nieces, nephews, and countless friends who loved him dearly.

Visitation will be held at Gerner-Wolf-Walker Funeral Home on Thursday, April 8 from 2 to 4 p.m. and 6 to 8 p.m.

Mass will be at St. Joseph’s Catholic Church in Marblehead on Friday, April 9 at 11 a.m. Following mass, friends of Bob’s are invited to celebrate his life at the Catawba Island Club pavilion from 12:30 to 2p.m.

In lieu of flowers, the family requests that donations be made to the Portage Resale Center (301 W. Second Street, Port Clinton, OH 43452) in honor of Bob.