On Friday, Nov. 30, Robert Martin Vermilyea passed on to his eternal home in heaven after a long and courageous fight against Frontotemporal Dementia. His loving wife of 58 years, Elizabeth, was at his side when he passed.

Bob was born on April 2, 1938 to Alfred and Cora (Krommenhoek) Vermilyea in Sioux City, Iowa. He joined the U.S. Navy after graduating from Central High School in Sioux City. He was on active duty from 1956 to 1959 and served aboard the  USS Merrick, which saw duty on the west coast, Japan, Philippines and Pribilof Islands.

In 1960, Bob was united in marriage to Elizabeth Ann Tracy. Together they raised two children. Bob was a loving and devoted husband and father.

After serving in the U.S. Navy Bob began a Sales Management career that took him, with family and pets in tow, to various locations in Iowa, South Dakota, Nebraska and Oklahoma while working in the tire industry.

Bob retired in 2005 after 44-year career. December 2012 Bob and Elizabeth moved to Port Clinton, Catawba Island. Since July 2018, Bob had been at Main Street Memory Care Center IN Avon Lake, Ohio. He passed away at the Cleveland Clinic Hospital in Avon, Ohio on Nov. 30.

Bob had a terrific sense of humor, was fun loving, liked by everyone he met. He loved the outdoors and enjoyed hunting, fishing and boating throughout his lifetime.

Bob was baptized in the Christian Reformed Church in Sioux City, Iowa and made Profession of Faith at a young age. He was active in church activities throughout his life, until later years and in declining health. During Bob’s career in the tire business he and family relocated to different cities and states and attended the Presbyterian Church and Reformed Church in America. He remained a member of Westwood Community Church in Omaha, Nebraska. He and Elizabeth raised two children, daughter Tracy Lynn (Mike) Westerfeld, of Bath, Ohio and son Keith Martin (Debbie) Vermilyea of Edmond, Oklahoma. Bob loved having his family around him. He shared a special and unique relationship with his children teaching unconditional love. More than anything he loved spending time with them. They feel richly blessed to have had him as their dad. They and Elizabeth will miss him dearly and love him forever.

To honor Bob “A Celebration of Life” is being held in Spring 2019.

Donations in memory of Bob may be made to “The Association for Frontotemporal Degeneration” (marked “Research”). www.theAFTD.org, phone (267) 514-7221. 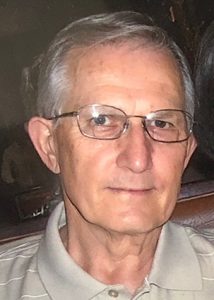