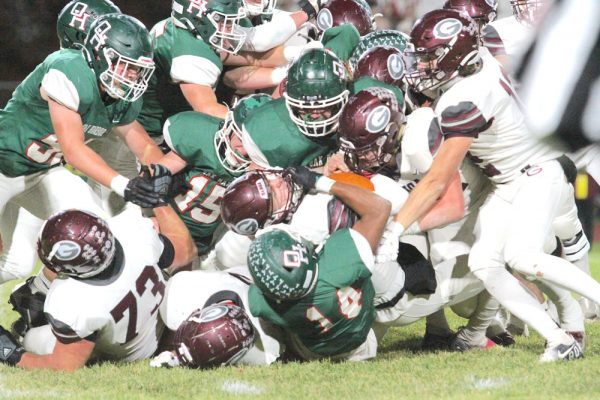 Jacob Ridener (58) and Zach Clune (59) lead the Oak Harbor charge in stopping the Genoa Comets to register a 47-36 win on Friday night. (Photo by Julie Overmyer)

When your team loses its second game of the season by a 28-25 count, in sports that is generally known as a “statement game.” That is what the Genoa Comets did to their Ottawa County rival Oak Harbor Rockets back on Friday, Aug. 26.

Last Friday night, the Rockets featured the maturity of sophomore quarterback Michael LaLonde, who connected on an amazing 14 of 15 passes for 269 yards and three touchdowns as Oak Harbor’s balanced offense this time around overwhelmed the Comets, gaining a 47-36 win to move to the next level of the Division V state playoffs at Eastwood.

The Rockets will head west on SR 105 to challenge Eastwood, an 11-0 powerhouse, this coming Friday, Nov. 4, playing at 7 p.m. in Pemberville.

The Comets got on the board first on an 89-yard pitch, catch and run from Aiden Brunkhorst to Mason Drummond. Memories of August 26 must have been thick.

Then the Rockets scored four unanswered touchdowns to take control of the game. Hayden Buhro scored on LaLonde passes of 56, 42 and 15 yards while Jacqui Heyward added another touchdown on a scintillating 86-yard LaLonde strike. Brunkhorst ran it in from 10-yards out to end an exciting first half with the Rockets in front 27-14.

In the second half, Rockets running backs Jacqui Hayward and Carson Ridener took over as Hayward scored three times on runs of 2, 9 and 29 yards. Added to their 269 yards in the air, the Rockets also rolled in the running game with 259 yards.

Ridener ran the ball 26 times for 131 yards while Hayward went 118 yards on just 12 carries. He probably would have gained more yards but the goal line kept getting in the way. He scored four touchdowns, three on the ground on one through the air.

Hayward also had two receptions for 86 yards for over 200 yards of offense on the night.