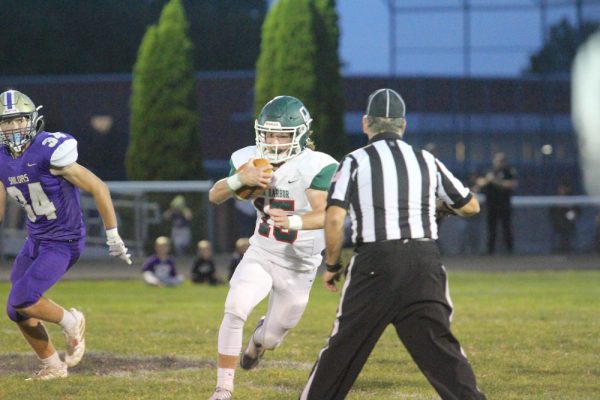 Sophomore quarterback Michael Lalonde (15) connected on 11 of 21 passes for 154 yards.

The Oak Harbor Rockets introduced Carson Ridener to the Vermilion Sailors Friday night. It’s probably safe to say that Vermilion would have preferred not to be introduced. Ridener stepped up to once again lead a grinding running attack as the Rockets battered their hosts from Vermilion, 42-6.

Oak Harbor has now outscored its opponents over the past three games by 150-6, steamrolling Toledo Woodward and Toledo Bowsher before laying waste to overmatched Vermilion.

Oak Harbor’s Carson Ridener ran for 159 yards on 24 carries and scored five touchdowns. The rest of the Rocket backfield carried it 17 more times for another 123 yards. Quarterback Michael LaLonde was 11 of 21 for another 154 yards giving the Rockets a total offense of 436 yards. Meanwhile, the Rocket defense held Vermilion to just 59 total yards for the game.

The Rockets return home this Friday for its biggest game of the season, hosting the red hot Huron Tigers. Huron possesses one of the best offenses in the conference, as they rolled to a 66-35 win over Willard last Friday night.