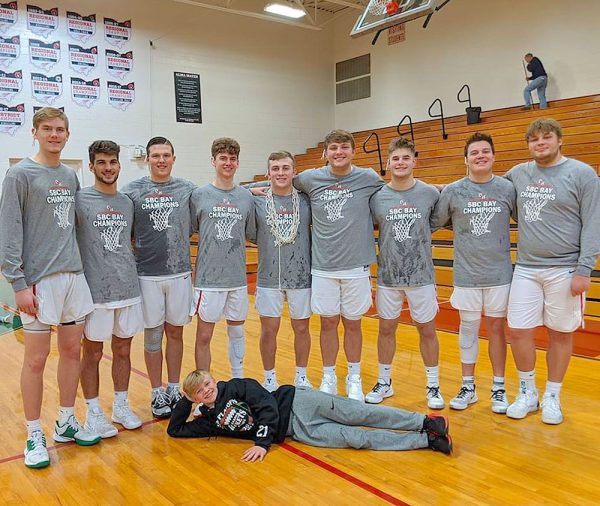 OAK HARBOR — In one of the best seasons in school history, it only made sense that Oak Harbor would win a league title.

Following a 74-34 victory over Edison on Saturday, the Rockets won a share of the Sandusky Bay Conference Bay Division championship, tying Willard with an 8-2 league record.

Oak Harbor (18-3) controlled things from the outset, taking a 23-9 lead after the first quarter and pushing the advantage to 47-14 at halftime. Four players scored in double figures as Jac Alexander scored a game-high 18 points. Blake Booker, who broke the school record for 3-pointers in a season with 60, scored 17 points, Anthony Stewart had 12 and Will Dowling finished with 10.

“It was most definitely a goal. I’ve always, as a coach, put league titles high on my radar,” said Oak Harbor coach Eric Sweet. “To win a league title, you have to play well all year long. Coming into our season, this was a goal of ours. We knew it wasn’t going to be easy because of the late football run. We were able to get the league championship, and we’re very proud of it.”

The Rockets nearly went undefeated in the conference. They lost to Huron, 59-57, in overtime, on a last-second shot and suffered the same fate in a 44-43 defeat at the hands of the Crimson Flashes. (Oak Harbor’s other loss was to Cardinal Stretch, 79-72.)

The signature win for the Rockets was a 67-60 win over the Tigers, which also came in overtime. Oak Harbor trailed by 22 points late in the third quarter before making an incredible run to force the game into overtime.

“We were down, (and) I was upset with the way we were doing things. I took a deep breath and I walked into the locker room. You can talk with kids, and we looked at each other and had a calmness,” said Sweet. “That’s a game I will always remember as a coach.”

It’s a special group of seniors, led by Alexander and Clay Schulte, two four-year starters, that have had tremendous success both on the court and the gridiron.

“Their work ethic is the reason we’re able to have the success we’ve had. Their toughness, that leadership, that experience (has been the difference),” Sweet said. “We could take that experience off the basketball court and do it on the football field. And take it and go to the (baseball) diamond or the track. It’s something you can’t teach. You see (success) from sport to sport. We’ve benefited greatly from this group of seniors. They’re a special group.”

The Rockets led 18-6 after the first quarter and 29-15 at halftime.
Gavin Preston scored 12 points, all of them on 3-pointers, to lead the Redskins, who finish the regular season 5-17 and 3-7 in the Sandusky Bay Conference’s Bay Division.