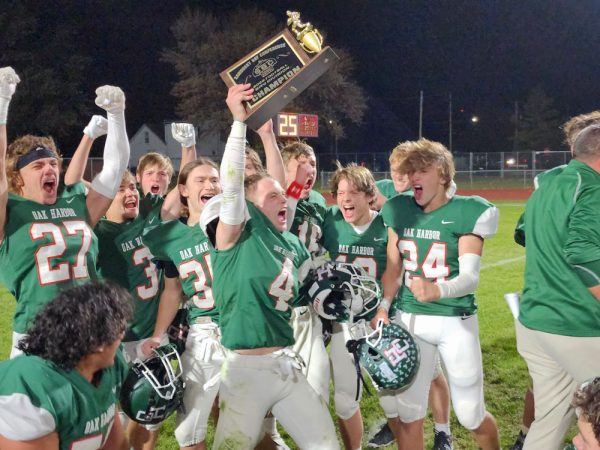 The Oak Harbor Rockets successfully ended their run as members of the Sandusky Bay Conference with a Bay Division championship and a 5-0 conference record. They did it in fine style, by virtue of a come-from-behind victory over their Ottawa County rivals, the Port Clinton Redskins, by a 25-21 count Friday night.

The game itself was everything fans of both teams expected . . . two evenly matched teams whose schools are just 15 miles apart, battling it out until the final gun sounded.

The difference in the game was Oak Harbor’s Tyler Thompson getting the handle on a squib kick from Port Clinton and returning it 65 yards for a scrambling score. That deciding tally came after a Redskin touchdown. Essentially, the Rocket offense scored three times and the Redskin offense scored three times. The kickoff return by the Rocket return team ended up being the difference in the game.

Statistically, both quarterbacks were superb. 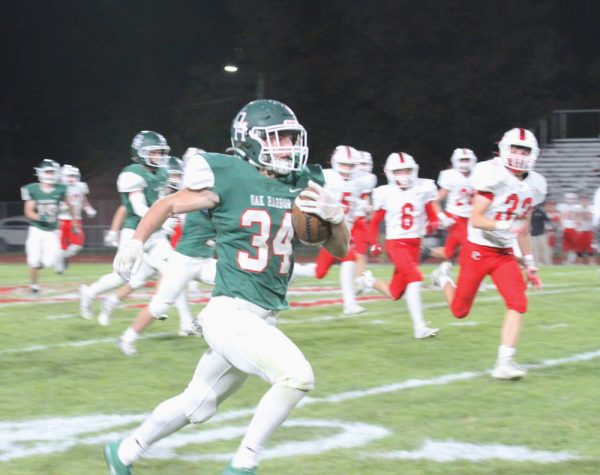 Oak Harbor’s Tyler Thompson worked his special team magic with a 65-yard return of a squib kick to make it 18-15 for the Rockets before the first half ended. (Photo by Julie Overmyer)

How even was this game? Both teams had exactly 298 total yards of total offense.

Port Clinton’s Dagan Meyers opened the scoring with a 3-yard run. The Rockets answered when Lalonde hit Jayden Buhro with a 59-yard pass and run to pay dirt. A short time later, Lalonde hit Jason Overmyer with a 4-yard pass to make it 12-7 for the Rockets.

Gillum hit Adam Thorbahn with a 20-yard TD pass with 24 seconds remaining in the second quarter. Gillum ran it in for the 2-point conversion to make it 15-12, and things were looking good for the Redskins.

That is when Thompson worked his special team magic with his 65-yard return to make it 18-15 for the Rockets before the first half ended.

Dagan Meyers, who had 76 yards on 14 carries, scored on a 5-yard run late in the third quarter to put the Redskins back on top 21-18. The Rockets engineered a long drive capped off by a 15-yard touchdown tote. This time Fulton Krupp’s extra point kick was good, making the score 25-21 in favor of the home team.

The Redskins weren’t finished, though. 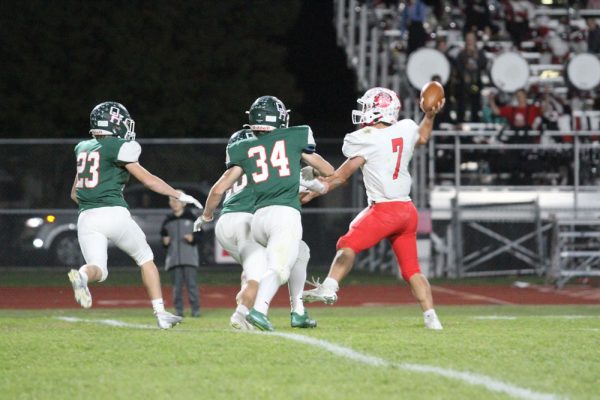 Port Clinton quarterback Cam Gillum was 25 of 33 for 192 yards and a touchdown. (Photo by Julie Overmyer)

Oak Harbor did its best to run out the clock late in the fourth quarter, but the Port Clinton defense forced them to punt, which they blocked, setting up the Redskins in Rocket territory with less than a minute to play.

This time it was the Rocket defense defiantly standing up for the stop, sending the home team fans into delirium.

Oak Harbor ended the regular season at 9-1, winning the Sandusky Bay Conference’s Bay Division with a perfect 5-0 record. The Redskins finished at 5-5 and 2-3 in the SBC.

Coaches Mike May from Oak Harbor and Port Clinton’s first-year coach Eric Leuthold both said it was a great game. The Rockets will host a playoff game next week with their opponent yet to be determined.

Oak Harbor and Port Clinton teams made the State Division IV State Playoffs. The Redskins snuck in as the No. 16 seed in the region and will play No. 1-seeded Liberty Center this week.

Oak Harbor gets a rematch game hosting Genoa in the first round.