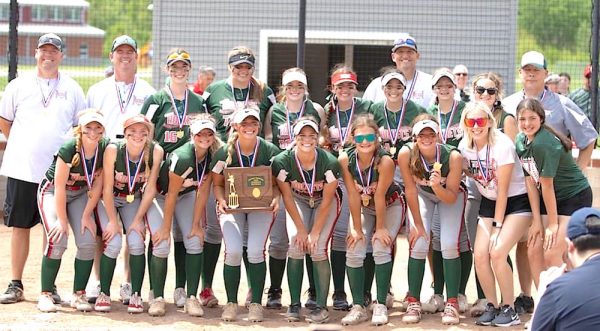 Led by Hannah Schimmoeller, Porter Gregory, Reagan Schultz and Alyse Sorg, the Rocket offense was a force, scoring in every inning but one and effectively putting the game away with four runs in the fifth inning to take an 8-1 lead.

Schimmoeller, a freshman, went 4-for-4 with a home run. Gregory hit a home run and finished with two RBIs. Schultz had two doubles, reached base three times and scored a run. Sorg hit a double and a triple.

“Wauseon’s M.O. is to score late, and we wanted to keep scoring when we were ahead,” said Oak Harbor coach Chris Rawski. “We want to attack when we’re ahead in the count. Hannah Schimmoeller attacked, hit the ball well and did a great job.”

The Rockets were the top seed in the Genoa District and the Indians, who won the Northwest Ohio Athletic League, were seeded second.

Gregory has been a force all season long in the third spot in the order and has hit five home runs. She talked about the team’s camaraderie and the desire to win after falling to the Indians last season.

“This is everything to me. It’s a big family,” she said. “We know no matter what, we’ve got each others’ back.

“It was kind of a revenge game from last year. We wanted to win the district title so badly. We just hit the ball and made our plays.”

Oak Harbor (22-8) scored a run in the first inning on an RBI groundout by Gregory and took the lead for good at 2-1 in the second when Ashley Schiller drove Sydney Overmyer home with a triple.

Schultz, who has committed to continue her career at Kent State, pitched a nice game, allowing three runs — just one in the first five innings — on eight hits to go with seven strikeouts and three walks. She struggled a bit in the second inning but made an adjustment and didn’t allow a run until the sixth when the game was basically out of reach.

“With our defense behind me, I felt a lot more confident. It’s a phenomenal feeling to finally make it to this point,” she said. “It’s only the third time we’ve done this in our history.”

It is the sixth time in Rawski’s 10 seasons leading the Rockets that they’ve advanced as far as the district finals, and this is the third time they’ve won a district title in six years.