Rockets rush for 455 yards in victory over Chippewa 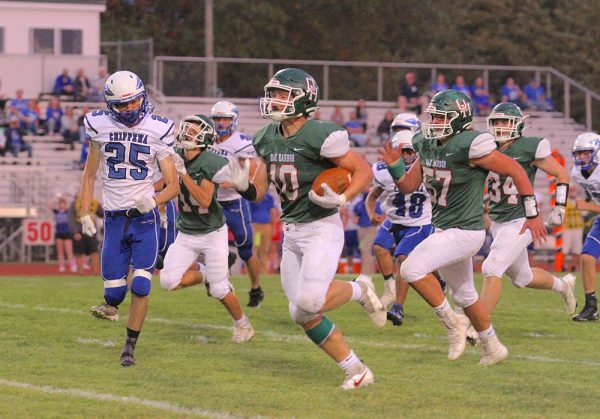 Oak Harbor’s Ryan Ridener scored the first touchdown of the night against visiting Doylestown, and the Rockets’ dominant running game prevailed, 69-17. Ridener had eight rushes for 69 yards and a score. (Photos by Julie Overmyer)

OAK HARBOR — Behind a dominant rushing attack that accumulated 455 yards, Oak Harbor defeated Doylestown Chippewa, 69-17, on Saturday night in the first round of the Division V, Region 18 playoffs.

The Rockets (4-3) scored 13 points in the first quarter and 35 in the second to put the game away. Chippewa (1-6) scored the game’s first points on a 24-yard field goal by Christian Moyer before Oak Harbor responded with 55 unanswered points.

Ryan Ridener gave the Rockets the lead for good when he scored on a 4-yard touchdown run with 5:52 to play in the first quarter. Cade Petersen’s extra point made it 7-0, and Oak Harbor was off and running. Eli Sherman then scored an 8-yard touchdown run to finish off the first-quarter scoring before running in a 20-yard touchdown just 16 seconds into the second quarter.

“Our offensive line was the story of the game. Since quarterback Ashton Schroeder got hurt, there’s been more pressure on the offensive line as we run the ball more. We stress playing hard for six seconds to the whistle, and our guys have done a great job,” said Oak Harbor coach Mike May. “Our wide receivers had a lot of touchdown blocks downfield. They’ve accepted the role, and they know they aren’t going to be catching a whole lot of footballs.” 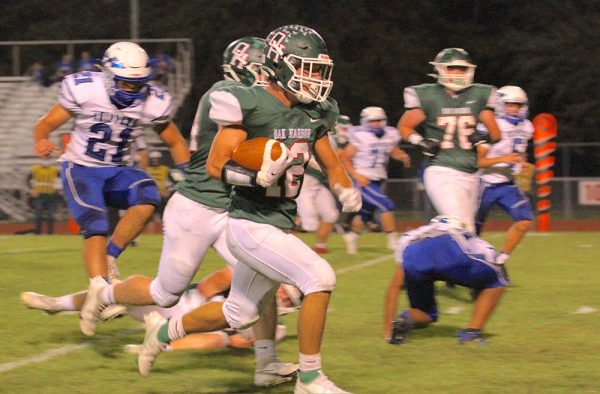 Eli Sherman had an outstanding night for Oak Harbor, with four carries for 52 yards and three scores.

Oak Harbor’s defense allowed a field goal on the opening drive and didn’t give up any more points until the third quarter, when the game was out of reach.

“I thought the defense played very well,” said May. “Chippewa had some explosive athletes, and we wanted to prevent giving up big plays. They kicked a field goal, and our defense did a nice job after that series.”

On Saturday, the Rockets, seeded 13th in Region 18, travel east to face Elyria Catholic at 7 p.m. The Panthers, who are No. 4 and compete in the Great Lakes Conference, are 3-2 and had a bye last week.

“They’re very talented. Offensively, they have a huge offensive line and a kid at quarterback who was all-state last year,” said May. “They have an all-state wide receiver who is 6-5, and a 6-7 wide receiver on the other side. Defensively, they graduated all their starters, but they’ve reloaded. We’re going to have to have a great week of preparation.”