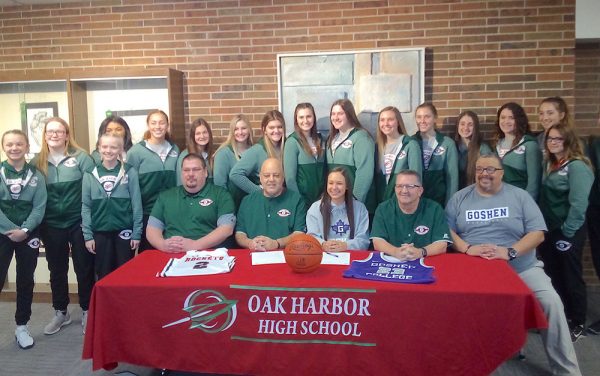 Oak Harbor basketball star Sophia Eli has announced she will continue her academic and basketball careers at Goshen College in northern Indiana.

For four years, Sophia Eli was a starter for the Oak Harbor Rockets girls basketball team, and was a key player in the team’s success during that span.

Eli is going to continue her career at Goshen College, an NAIA school located in northern Indiana. Goshen, which has a population of nearly 32,000, is located about 125 miles west of Toledo.

Eli has led Oak Harbor to two sectional titles and helped the Rockets establish themselves as one of the top teams in the Sandusky Bay Conference. One of the high points in her career came as a freshman when she helped Oak Harbor defeat powerhouse Toledo Rogers, 56-55, in overtime in a Division II district semifinal. She hit a couple of 3-pointers and was instrumental in the Rockets’ victory.

Since that loss, Rogers won two consecutive state championships and has yet to lose in the postseason.

Eli recalled what playing in that game was like.

“It was an unexplainable feeling. It’s something I will never forget. The game itself was very intense,” she said. “However, we did not think anything of it. It was just a regular game, but no one knew we’d come out on top. It was a crazy game, and I’ll forever cherish moments like that.”

Eli, the youngest of five children, leaves Oak Harbor as the fourth all-time leading scorer in the program’s history with 1,146 points.

“These past four years have been amazing. They’ve been full of memories, unforgettable moments and lots of wins,” she said. “I wouldn’t want to play for any other school. Oak Harbor basketball will forever hold a special place in my heart. It is where my basketball career started and where I grew as a player. I am grateful for the opportunities the program has given me and the future it helped me create. I couldn’t ask for better teammates from my freshman to my season year.”

Eli comes from a driven family. Three of her four siblings played sports at the collegiate level.

“I am very motivated by my siblings’ success and I want to follow in their footsteps. They inspire me to keep moving forward and keep working hard,” she said. “I am super blessed to have four older siblings that are supporters and work hard.”

She also has a close relationship with her parents, Art, an assistant coach on the basketball team, and Rebecca.

“My mom is my best friend. She has almost never missed a game, and the only reason she had to was because my dad was sick and in the hospital a few years ago. My mom is my biggest fan,” Eli said. “My dad and I have a very close relationship, even though we do not always see eye to eye.

“We both have a huge love for the game and love winning. He has a very competitive spirit and he has passed that on to me. He has pushed to be my best since Day One. I cannot thank him enough for pushing me to reach this point.”

Eli also has a close relationship with her coach, Tom Kontak, who has overseen a great deal of success since taking over eight years ago. Kontak, who had success in Genoa before coming to Oak Harbor, has over 200 career victories and is the all-time leader in wins for the Rockets. He has twice been named the Ohio Coach of the Year, both in Division II and III.

“Coach Kontak and I have been very close for years. We are not only close because of basketball, but our families are close as well. He has coached me, and my two older sisters, during our basketball careers,” said Eli. “He has pushed me to become the best player I can be and I am grateful to him for being such a passionate coach.”