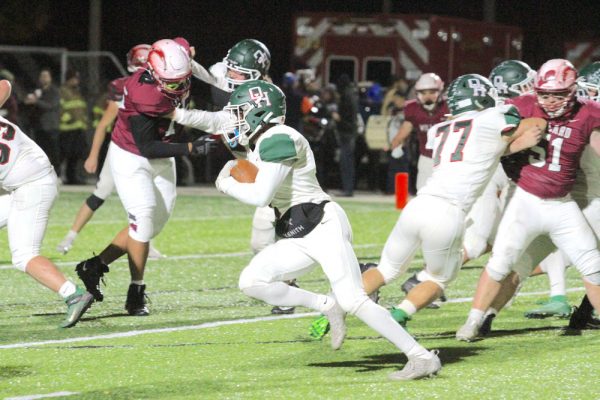 The Oak Harbor Rockets did a great job of showing off their depth at running back behind their dominant offensive line as they claimed ownership of the Sandusky Bay Conference Bay Division title Friday night with a 63-7 win over Willard.

This time it was Jacqui Hayward with a six touchdown effort in the title-clinching game. Five of his TDs were captured on rushing plays and another came on a 29-yard pass reception, which was Michael Lalonde’s only pass of the night.

Hayward rambled for 213 yards on only 10 carries, averaging over 21 yards per carry. Amazing. Hayden Buhrow also tallied on a 79 yard run as the Rocket running game was totally dominant.

The Rockets seek to put a giant exclamation point on their regular season this Friday night as they host Ottawa County rival, Port Clinton. The Redskins are 5-4 on the season, but feature returning quarterback Cam Gillum who led them to the state semifinals last season along with running back Dagan Meyers. They lost 27-26 last Friday to Huron on a field goal in the final minute of the game.