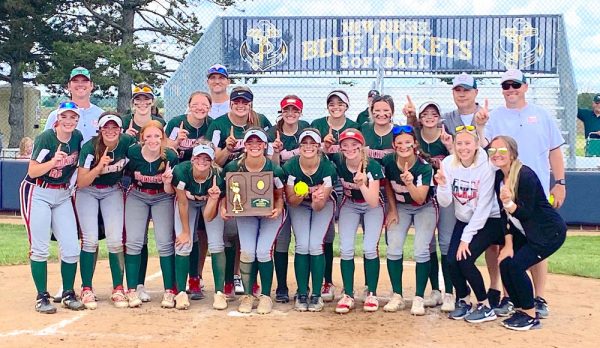 NEW RIEGEL — A five-run lead was just enough for Oak Harbor as it held off a furious Lexington rally that fell short with the tying run at second base as the Rockets defeated the Lady Lex, 5-4, in a Division II regional final at New Riegel High School.

Oak Harbor, which improved to 24-8 with the win, will play in the Final Four at Akron’s Firestone Stadium against Plain City Jonathan Alder on Thursday at 12:30 p.m.

But Reagan Schultz induced Eyan Underwood into hitting a groundout back to herself to end the game with the tying run on second.

Schultz, who beautifully worked in and out of jams for part of the game, struck out the first two batters in the bottom of the seventh before Kylie Galownia hit a single up the middle. A liner by Jillian Bammann was nearly caught by second baseman Ashley Schiller, but fell into right field for a hit. A base hit by Jillian Morr was followed up with an error in the outfield that allowed two runs to score and moved Morr to second before Schultz got Underwood on the groundout, one that Schultz had to leap to get before throwing to first base for the final out.

“I was trying to tell myself that I’m so proud of my team and keep my composure so the underclassmen did not freak out,” Schultz said of Oak Harbor coach Chris Rawski’s visit to the mound before the final out was recorded. “That was the bottom of the seventh and that’s all Lexington had left. We had to stay strong and stay positive. We had to work together and believe in each other in order to get through that.”

Understandably, Rawski, now in his 10th season leading the program, was emotional after the game.

“It’s never about me,” he said. “It’s about how hard this group works. Losing our first nine games when we started in 2012 to getting to the state final four is pretty darn cool.

“I think all of these experiences that this group of coaches has had — how to handle the preparation, the layoff between games, things like that. We have two former players who are assistant coaches in Dani Epling and Kaytlynn Sandwisch who had their hearts ripped out twice at regionals.”

It was the culmination of a turnaround that saw the Rockets start 1-5 during it’s Spring Break trip to Florida, only to see them win 23 of their next 26 games to get to 24-8.

“The little intangible thing is we came back so tight as a group. We went down there as little groups in classes and we came back as a family,” said Rawski. “That’s made the difference.”

Schultz talked about the team’s camaraderie.

“This team is friends on the field and off the field,” she said. “We are so close. Not one girl argues with each other, and we all have the same goals.

It’s the first-ever regional championship for the program, which came close in 2017 when it advanced to the regional finals before falling, 2-0, to perennial power LaGrange Keystone.

If there was a player of the game, it was Schultz, who had two singles, a walk and an RBI. She allowed four runs, two of which were earned, and scattered 11 hits.

“Early on, I thought Reagan was super sharp,” said Rawski. “We had a great scouting report from our pitching coaches. It was a fantastic job by Reagan, she was so composed all day.”

Schultz led off the game with a single and advanced to second on a bunt by Remi Gregory. Porter Gregory grounded out to move Schultz to third, and Hannah Schimmoeller drove her in with a single to right.

In the top of the second, Ashley Schiller singled and Alyse Sorg drew a walk before Sydney Overmyer grounded into a force at second base. Schultz then walked to load the bases and Remi Gregory pushed the lead to 3-0 when she singled to score two runs.

In the bottom of the second with two out and nobody on, Schultz took a line drive from Kaylie Eichorn to the abdomen and was on the ground for a few minutes. But Schultz shook it off and got Sydni Clever to line out to third to end the inning.

The difference in the game came when Oak Harbor added two runs in the sixth inning. Shortstop Reese Adkins, who made a couple of fantastic plays on defense, singled and advanced to second on a passed ball before scoring on Sorg’s single. Sorg advanced to second on the throw to the plate and scored on a base hit by Schultz to push the lead to five runs.

In the bottom half, the Lady Lex started off with Galownia drawing a walk and Bammann followed that up with a single to center. Morr grounded into a force at third base and a single by Underwood loaded the bases. Eichorn grounded into a force at third, but the throw home in an attempt to get the double play saw Galownia block catcher Allie Giezie’s view, and she was unable to make the catch, allowing a run to score. That was followed by an RBI double by Clever, but Schultz got Emily Winters to pop out to second.