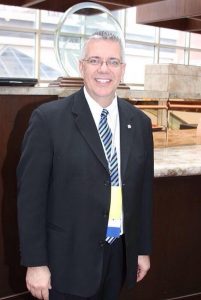 Port Clinton High School Band Director Rod Miller has been named a quarter-finalist for the music education award by the Recording Academy and Grammy Museum for his many years as a stellar band director and educator.

When Port Clinton High School Band Director Rod Miller spins around his yard to cut the grass on a summer weekend, he is plugged in to the musical marches of the legendary band director John Phillip Sousa. It is a passion for the local band director that is only exceeded by his dedication to family, his band students and the community.

“I’ve spent 32 years teaching music, and 32 years portraying John Philip Sousa,” said Miller, with a laugh. “I love both. My band students become family, and I have to be thankful working for a great school system, a wonderful community and having such outstanding students. It has been a labor of love.”

Miller welcomed his senior band members to his home on Sunday for their annual cookout. The seniors are also honored in May at his annual Stars, Stripes and Sousa Concert at the Port Clinton High School Performing Arts Center, where each senior is given a red rose.

Miller was surprised in February when notified he was a nominee for a Recording Academy and Grammy Museum award for his work in music education. When he was named a quarter-finalist on May 1, he was dumbfounded, and a little disconcerted.

“Never in my music career has it ever been about me,” Miller said. “Quite a number of years ago I quit teaching just music, and started teaching the kids.

Music is a vehicle to teach so many other things, from people skills to leadership in the community.”

His students have performed all over the country and excelled, but Miller is most proud of what his students achieved in life after Port Clinton High School.

“One of my kids is a top emergency room doctor now,” he said. “Another is in music business on the West Coast, and has played with a Grammy winner. On the long list is an executive for Proctor & Gamble, board of education members and teachers. I’ve been blessed to have taught kids who went on to do remarkable things.”

Miller says being member of the band family is important. It’s all about parents, community and school. 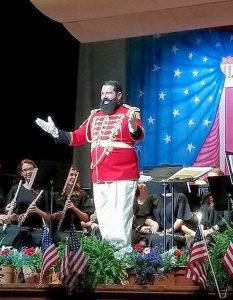 Band Director Rod Miller of Port Clinton High School has a passion for the legendary John Philip Sousa, and performs each year at the Sousa Graveside Ceremony in Washington DC. Miller’s senior band members are in the spotlight at a special Stars, Stripes and Sousa at the Port Clinton High School Performing Arts Center each year, which will be held on Saturday, May 16.

An Ohio State University band member for five years, Miller “dotted the i” three times. He began his teaching career at St. Henry High School, where the marching band was quite visible as the football powerhouse won state championships. Its star quarterback, Todd Boeckman played for Ohio State University and the Jacksonville Jaguars.

Miller made the move to Port Clinton High School a dozen years later to help his ailing parents.

His wife, Kathy, teaches the youngest kids at Bataan Elementary School, and their twins, Ella and Collin were Port Clinton band members and are now juniors in college.

“I came from a very musical family,” said Miller. “My mother was an organist and director of a large church choir. We always had music in the house, and my three brothers and I all played music. I was the one that had the real music genes, though.”

The infatuation with John Philip Sousa has led Miller to become an authority on the legendary band director, who was the director of the US Marine Band from 1880-92 and well known around the country and the world. It has also encouraged Miller to perform around the country in his authentic Sousa garb, even dyeing his hair and beard black to match the man whose rank in the military was Leader of the Band.

This week, Miller is letting his white beard grow wild so it will be the right length for his Christmas stints as Santa Claus.

Miller is proud that his musical genealogy includes the noted composer Stephen Collins Foster, whose romantic ballad, “Jeanie with the Light Brown Hair” (1854), is perhaps the most famous of the songs he composed for his bride. In 1851, Foster composed the sentimental song, “Old Folks at Home,” more commonly known as “Swanee River.”

“Foster is my great-great-uncle,” said Miller. “In a couple of weeks, Kathy and I will be heading to the University of Pittsburgh’s Stephens Collins Foster Museum. We’ll be thrilled to share what we know about him. It will be a chance for the museum and I to fill in each other’s blanks on the famous composer.”

Miller says that Port Clinton High School is a small school, “but has a lot of great things going for it. Our band is proud to be a member of the community, and while I’ll be 54 on Sunday, I can’t imagine retiring just yet. I’ll never be far away from music, but it’s not time to pass the torch just yet.”